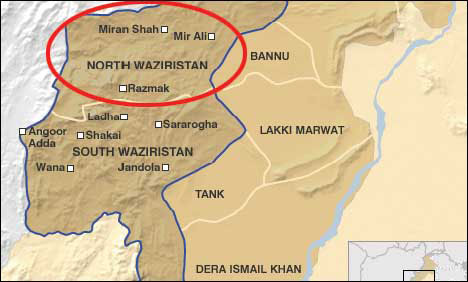 The first incident happened near tehsil Mirali while the second came on Miranshah-Razmak road.

Political administration officials while talking to FRC said that on Tuesday evening, during late hours, an IED hit convoy of security forces near Patasi Ada in Hisori village, located in tehsil Mirali, wherein one security personnel was found injured while the second attack came at Miranshah-Razmak road in which 16 security forces personnel were injured seriously.

“All the injured have been shifted to military run hospital in Bannu and four out of seventeen have been found in critical condition”, said the official.

Soon after the attacks security forces cordoned off the area, launched search operations and clamped curfew in NWA that continued on Wednesday (today).

Locals of the area while talking to FRC on phone said that during security forces retaliatory firing a shell fell upon the house of a local in Tappi village in which one person died while another received serious injuries.

Till the filing of this report no militant group has claimed the responsibility of the attacks.

It is to mention here that TTP has ruled out chances of peace talks with the government of Pakistan. In past attacks over military convoys in NWA had been claimed by Ansar-Ul-Mujahideen militant group that has been operating in the agency for the past few years. The banned organization holds that they carry out such attacks in avenge of drone strikes in tribal belt of Pakistan.