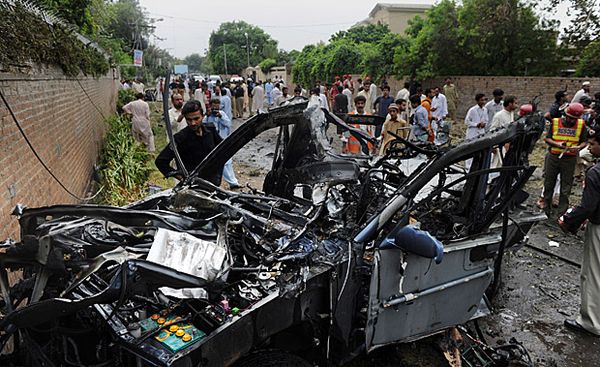 Another attack on US citizens: kills four, injures 21 in Peshawar

Mian Iftikhar Hussain provincial information minister said that four person including two US personnel and a policeman were killed in the incident. He added that the fourth person supposedly be the attacker.

US embassy in Islamabad denied the news that any of US national was killed in the incident while confirming that two US and two Pakistani employees of US consulate were injured in the attack.

Charged’ Affairs of US embassy, Ambassador Richard Hoagland thanked local security personnel for saving consulate employees. He thanked “I am grateful for the humane professionalism of the local Pakistani security forces that saved the lives of the two American diplomats and two Pakistani local staff of the US Consulate General in Peshawar by pulling them to safety after their vehicle was attacked”.

The suicide attack that left a big carter on the road similarly affected on civilians. At least 21 people were reportedly got sustain injuries and several building were damaged in blast. Bomb Disposal Unit estimated that 110 Kg explosives were used in blast.

Neither Tehrik Taliban Pakistan a banned militant outfit nor any other group has claimed the responsibility for the current attack so for.

Several attacks of such kind have already been occurred in Peshawar. The last attack on US consulates’ car happened in May 2011 when a remote control car was detonated near US-Consulates’ armored vehicle near University town Peshawar that killed a local bye-stander.

Lynn Tracy United Nations Consul General also survived an attack by suspected militants on her armored-plated car in University Town Peshawar. Two US diplomats were among the ten persons that were injured in that attack. Couple of year ago US official Stephen Devance was shot dead in the University Town.

Whoever these attackers are; religious fanatics, TTP or militants or any other group, they give a clear message to propagate their anti American sentiments by challenging the sanctuary for US in Pakistan.