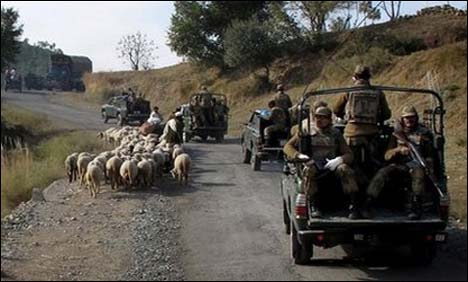 Attack on SF Convoy in NWA: At least 3 killed and 15 injured

According to details a vehicle of security forces was set ablaze when a road side bomb planted on the Mir Ali bypass went off and killed at least two and injured seven other security officials.

Officials of the political administration and intelligence sources confirmed the occurrence. The security officials added that the injured were shifted to Bannu CMH via helicopter for treatment.

Independent sources also confirmed that 2 security personnel were killed while 7 others injured during the curfew imposed by the authorities on Sunday.

Sources revealed that the curfew imposed on Sunday in North Waziristan Agency was prolonged on Monday (today).

Local sources told FRC field reporter that a military helicopter fired on different places early this morning and destroyed some buildings including a hotel, Shadab Floor Mill and a government hospital in Haso Khel village.

Official sources explained that they attacked the militants’ hideouts while local people said that at least six more civilian were injured including two women as result of afresh shelling by the security forces.

A large number of people were unable to enter into NWA who had come from different areas of Pakistan and especially from Lahore after participating in Tableeghi Ijtama at Raiwind.

Two different militant groups claimed the responsibility of attacking on convoy of security forces on Sunday that triggered this military operation and prolonged the curfew in NWA.

Spokesperson for the TTP Jandolla Group, Ahmadullah Marwat claimed that they had carried out the attack on convoy. He claimed that TTP JG had taken revenge of Ahmad Khan Bangalli’s death killed in a drone strike in Mir Ali.

Meanwhile TTP spokesman Ehsan Ullah Ehsan called from an undisclosed location to FRC field reporter and claimed that the TTP Jandolla group had no existence in tribal areas. He claimed that the attack on military convoy was carried out by TTP.

It is worth mentioning that on every Sunday security forces regularly impose curfew in North Waziristan Agency for safe movement of the Army convoy but in spite of precautionary measures the convoys are confronting violent attacks.