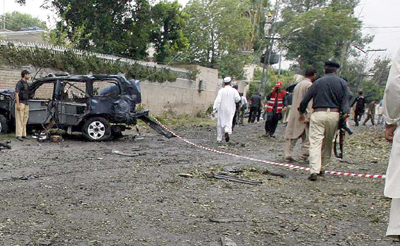 Blast in Peshawar claimed 7 lives including an SP, leaving 36 injured

Islamabad, Nov 07: Seven people including Superintendent Police Investigation were killed while 36 others were injured when a suicide bomber blew himself in Kabbaly Bazzar of Peshawar here on Wednesday morning, FRC field reporter told.

According to details, seven people were killed and thirty six others sustained injuries when a suicide bomber blew himself near Fazal-e-Razak police station in a busy market of Kabbalay Bazar in Peshawar. Those who were killed, include Mr Hillal Haider SP investigation and three of his bodyguards.

Police sources added that four civilians also died in the attack. All the dead bodies along with the injured were shifted to the Lady Reading Hospital Peshawar for further treatment.

Jan Mohammad, another eye witness said that he was some five hundred yards away from the spot when he was suddenly jerked by a big bang. “Nobody knew what happened but dense smoke was seen near Kabbalay Police station”, said the eye witness. “Dozens of people were heard screaming for help immediately after the blast”, said Jan.

The eye witnesses told FRC that scattered pieces of human bodies were seen everywhere around the place of occurrence.

The security officials including police personnel have been under attacks of terrorists persistently for the last many months. On October 14, Saturday late at night more than a hundred Tehreek Taliban Pakistan militants attacked a police station in Matanai area near Peshawar and killed six police officials including SP Khurseed Khan who had reportedly killed and arrested many TTP militants in Peshawar and Matanai.

No one claimed responsibility for the present attack till the time of filing this report.