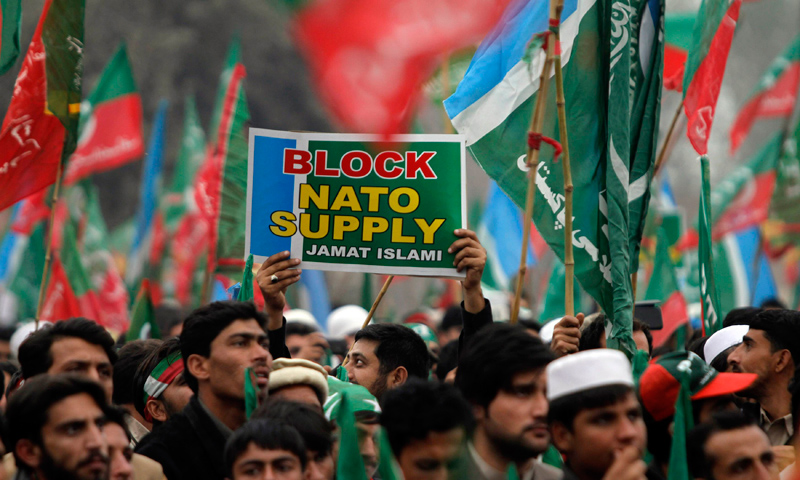 Peshawar, Nov 24:  A large number of workers and supporters of Pakistan Tehreek-e-Insaf staged a sit-in on ring road in Peshawar here on Saturday demanding an end to US predator attacks in the tribal belt and settled areas of KPK, FRC learnt.

The speakers of the rally/ sit-in vowed to block NATO supply routes permanently.

“We will not allow NATO supplies to pass through Khyber Pakhtunkhwa and PTI workers would blocked the supply routes until drone attacks were stopped in the tribal area as well as Khyber Pakhtunkhwa”, said the PTI chairman.

He further said that we will stop NATO supplies to and from Afghanistan at any cost adding that even at the cost of our provincial government of KPK.

“Though more than 50,000 innocent Pakistani including thousands of soldiers lost their lives during the war on terror but still the US do not trust us”, said Mr Khan.

He invited the KP government to come forward and join our protest against the drone as the recent drone attack has taken place in Khyber Pakhtunkhwa.

On the other hand around 100 workers of Pakistan Tehrik-i-Insaaf set up checkpoints on a main road in Peshawar city leading to Afghanistan and searched for the trucks carrying supplies for NATO.

They stopped NATO supply trucks and reportedly tortured the drivers.

Meanwhile Inspector General of Police KPK issued orders to lodge FIRs against those who stopepd NATO Supplies by force and after the directives of Police chief FIRs have been lodged against more than 35 PTI workers.

The sit-in was also participated and addressed by Jamat-e-Islami leaders.