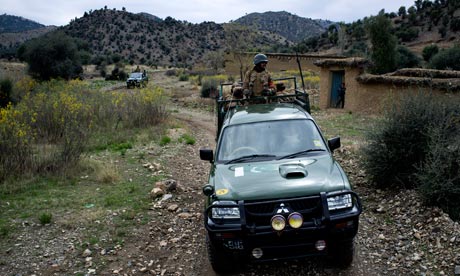 According to details the military patrolling party was on a routine duty when a dozen of armed militants attacked it near Sra Khawra Matanai area of Peshawar in the late night hours of Wednesday. As a result six men of military died on the spot while two received wounds.

“Militants were equipped with latest weaponry and hand grenades”, a security personnel with the condition of anonymity told FRC.

“Initially they hurled hand grenades on security forces party and supplemented it with indiscriminate firing”, told the sources.

Security forces repulsed the attack and claimed to have killed five militants from the attacking party.

Two security personnel, including a captain, sustained bullet injuries which were later on shifted to Combined Military Hospital Peshawar for medical treatment. Also three vehicles of security forces burnt down in the attack.

According to the locals the encounter between militants and the security forces lasted for around one hour.

Tehreek-Taliban- Pakistan spokesman, while talking to our reporter from an undisclosed location, has claimed the responsibility of the attack.

“It was our work and would continue to do so in avenge of TTP’s number two, Wali-Ur-Rehman, death”, said the spokesman.