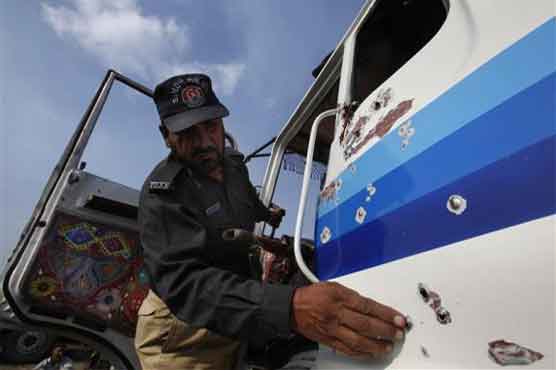 The Nato container bearing registration no.TLP-356 was heading towards the Torkham border after clearance from NLC terminal Jamrud when it was intercepted by unknown motorcycle riders militants near Tedi bazaar, sources said.

They opened indiscriminate firing and killed the driver on the spot, sources said. The deceased was identified as Shahzada s/o Mohammad Alam, an Afghan national presently residing in Akora Khattak.

Partial damage was also done to the vehicle. Soon after the incident the Khasadar and administration officials rushed to the scene, cordoned off the whole area and launched massive search operation.

Assistant Political Agent (APA) Jamrud Bakhtyar Mohmand said that the targeted container was not that of NATO assignments, but a private property and search operation has been initiated in the area to trace out the culprits.

Abdul Azaam brigade claimed the responsibility for the incident. Abu Zarar, the spokesperson of the brigade told the media persons on phone from unknown place that in future the security personnel providing security to the NATO supply would be also their target.

It is worth mentioning here that after resumption of NATO supply after Salala check post incident so far two NATO supply drivers have been killed by the militants in Jamrud.