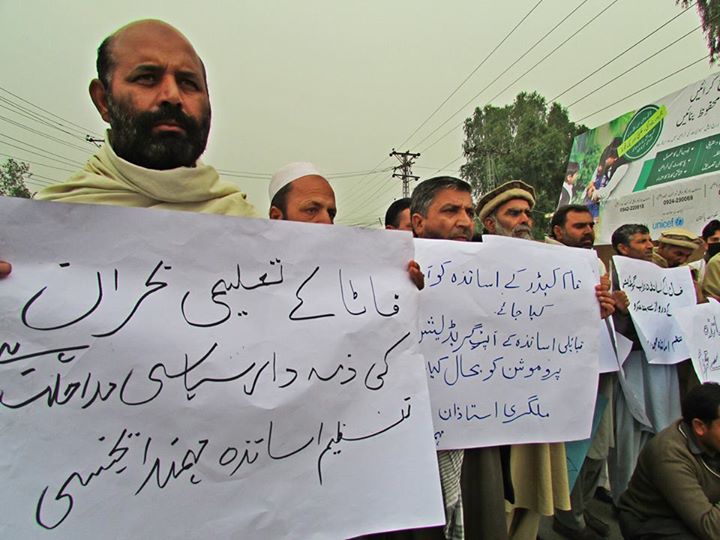 Islamabad, December 9, 2015: All Tribal Teacher Association FATA and KPK held a peaceful protest at Islamabad press Club to express their anguish over the persistent delay in up-gradation of scales of government teachers in the Federally Administered Tribal Areas, here on Tuesday, FRC learnt.

Large numbers of teachers belonging to different areas of FATA participated in the protest and were holding banners and placards inscribed with the slogans in favor of their demands.

Speaking on the occasion, President All Tribal Teacher Association FATA and KPK, Mr. Khan Malik Khan Masood said that their colleagues in Khyber Pakhtunkhwa had long been upgraded to upper scales while the Federal Government and Fata Secretariat despite of the notification issued by KPK government in 2013 continued to deny tribal teachers from their basic right who were performing their duties in thousands of government schools in adverse circumstances.

“The lack of willingness and biased attitude of Federal Government to implement the policy to upgrade scales of teachers in Fata had caused unrest and feeling of deprivation among tribal teachers”, said the Khan Malik Masood.

“For years more than 7,000 vacancies both in primary and high schools are vacant in various areas of FATA which is not only deny the tribal graduates from employment opportunities but is also contributing significantly towards educational unfreedom in the area”, added Khan Malik Masood.

Mr. Abdul Qayum Khan Vice President AFTA while addressing the participant of the rally said that several cadres of teachers were ignored in the up-gradation policy.

“The poor teachers were deprived of the incentives for unknown reason and the government should stop exploiting schoolteachers and implement the upgradation plan and release all the incentives to them without any further delay”, said Mr. Abadul Qayum Khan.

“We have held several meetings with the relevant officials to resolve the problems of tribal teachers but it seemed that the Federal Government was least bothered to pay attention to the just demands of tibal teachers”, Said Siraj Ul Haq.

Later Federal Minster for Education, Mr. Baligh Urehman also attended the protest and promised to take all possible efforts to resolve the problems of tribal teachers.

“We will discuss the issue with the representative of Ministry of SAFRON and will leave no stone unturned to resolve the problems of tribal teachers”, said Federal Minster for Education Eng. Baligh Urehman.

A primary school teacher from Upper Kurrum Agency while speaking to FRC urged the government to open all closed educational institutions in the area to enable the tribal students to get education at their doorsteps.

“Majority of the schools in our area are closed and those opened also lack basic facilities i.e. furniture, blackboards etc”, said Syed Gul.

Large numbers of schools have been destroyed in FATA due to the rising tide of militancy and consequent military operation to counter militant activities during a past decade. All Tribal Teacher Association also Urged the government authorities to make sure the reconstruction of the destroyed school buildings and repair the partially damaged schools as soon as possible.

For days now thousands of schools in FATA remained closed because of the protest which the ATFA member said will continue until the Federal Government accepts their demands.