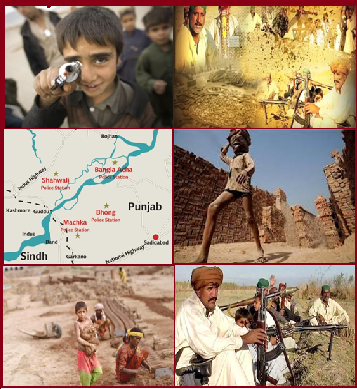 South Punjab lags behind in terms of progress, economy, and development as compared to the rest of the province. The deserted region has proven itself to be fertile for organized crime and swarms with criminal gangs which loot and terrorize their vicinities not only for easy money but also for satiating ulterior motives. The nemesis of  ‘Chhotu Gang’ which was believed to have connections with the Baloch insurgents is only one step towards taking out the roots of Crime-Terror Nexus from South Punjab.

There was a time when speaking about ungoverned territories, Pakistan’s north western border, specifically the Federally Administered Tribal Areas (FATA), came to one’s mind immediately. However, in the wake of two very conspicuous events of the year 2016 – a high profile suicide attack in Punjab’s provincial capital, and a ground operation against a notorious criminal gang in the southern parts of Punjab[1] – questions rose on the government’s control over the settled parts of the country. Although such acts of violence were carried out in the past as well, these events, occurring against the backdrop of intensive military operations against the militants in FATA, raised considerable uproar. Moreover, these violent incidents also changed the definition of ungoverned territories, incorporating not only the places where the government writ is dwindling, but also those where acceptance for local felonious bandits and violent extremists thrives.

The rural sections of South Punjab, especially the areas that fall within Bahawalpur, Multan, and Dera Ghazi Khan Divisions, are known for insecurity and organized crimes. Bangla Ichcha, Sonmiani, Bhong, and Machka are among the most notorious areas for criminalities in South Punjab. The villages and settlements in these localities are home to people working in brick kilns, and poor peasants who are merely guardians of properties; these people work for inadequate wages and therefore, poverty is a dominant feature of the region.[2] Poverty is one of the major reasons as to why people adopt crime and even terrorism as their professions. The risk of getting looted or even murdered increases after twilight in these areas which indicates the presence of several small and large criminal groups in the area. One of such felonious groups was Chotu Gang, against which a ground operation was carried out in April 2016 in Rajanpur,[3] a district connecting Punjab province with Sindh and Baluchistan. Following the successful operation, the links between this gang and Baloch insurgents were also revealed. From this, it is inferred that organized crime contributes towards the larger crime-terror nexus, providing easy funds for various violent extremist organisations’ operatives.

Chotu gang emerged as a threat at national level during the past couple of years and attracted much attention which induced even more panic among the masses. In the region between Southern Punjab and Northern Sindh, however, these bandits had been known and feared since decades. Rajanpur, Rahimyar Khan and Kashmore districts, like three points of a deadly triangle, encapsulated this organised criminal gang’s sanctuaries in river islands of River Indus.[4] The region retains an interesting geography; to the river’s east, National highway runs parallel to it at a distance of around fifteen kilometres; to the west, at a distance of ten kilometres runs the Indus Highway. The heavily forested islands served as perfect safe havens for the gang which carried out highway banditries, in addition to kidnappings and murders. The terrain along the river, in these areas, is dry and sandy and is not much populated.

Most of the members of this gang belonged to Mazari tribe, hailing from Rojhan sub-district of Rajanpur. In 1830s, it was this tribe that offered resistance to the Sikhs when Maharaja Ranjeet Singh attempted to conquer Sindh. The area, on one hand, is known for tales of bravery, and on the other, for poverty and land feuds. The life story of Ghulam Rasool, after which Chotu Gang is named, as told by him in an interview, is not only a common example of how the group found recruits, but is also a manifestation of the sad and wretched state of affairs that prevailed then and continues even now. He belonged to the same tribe and told that he used to work at a truckers’ tea stall at the age of 13. He joined the gang in his youth, in order to acquire some land that his family had lost while he, along with his brother, was locked up in a jail.[5]

The gang, in its strength and operational capacity, proved itself to be dangerous enough to have been a part of the greater crime-terror nexus, when its links with the Baloch insurgents were revealed, as said earlier. It consisted of over 300 members according to one account, and was equipped with sophisticated weaponry. The criminals associated with the gang carried out organized crimes on a large scale, including gun-running and smuggling, apart from kidnappings, murders, and robberies. There were many factors behind this unflinching strength which should not be ignored when and if actions are to be taken against other similar groups operating in South Punjab. The geo-strategic location of the gang’s safe haven was one of the major reasons behind its success; the two highways running parallel to the river on both sides, remained the supreme focus of the gang to carry out criminal activities; they looted vehicles on the highways and conveniently brought the booty back to their not so far hideouts in the islands; it took lesser time for them to retreat to their sanctuaries after carrying out a felony, than it would for the incident to be reported; such was their strategic placement in the river. Besides, the dense vegetation of the islands favoured them in case of any foreign ambush or intrusion attempted to root them out; it also served as an ideal place to keep hostages as kidnapping was also one of their major fortes. According to a local, “they abducted people and contacted their families for ransom and in case the family could not afford the price, they would chop the bodies up and send them home packed in sacks.”[6] What contributed even more to their operational capacity in the region, was the fear they had successfully invoked among the inhabitants of nearby settlements over the years. The kidnappings carried out by the gang and its methods of acquisition of ransom had rendered it a living nightmare for the simple people of that region. Similarly, local politicians also used these criminals to pressurize the masses to vote for a certain candidate during the elections. According to reports, their affiliations were not only with the local political figures, but could even be traced back to the higher political circles.

Secondly, the bands similar to that of Chotu gang operate in remote areas of South Punjab because nothing substantial in the name of development has been done there. Even for the government officials, a station in South Punjab is considered to be a very difficult one to serve. With the fears that these gangs can easily spawn, they are perceived as unofficial monarchs of the region. For instance, in Chotu’s case, there were four police stations near the “perfect hideouts” of the gang: Bangla Ichha, Bhong, Machka, and Shahwali, but they had never been adequately equipped.[7] It was right under the noses of already faltering establishment that this gang imbibed so much strength, which also indicated the failure of police as the local law enforcement agency of the government. The gang, however, was not completely uninfluenced. The leaders of the Mazari tribe had, time and again, implored the gang to revoke certain actions. For example, in 2005, the gang kidnapped 12 Chinese engineers from the Indus highway but, owing to the pressure by the leaders of the tribe, it had to release them without a ransom.[8] This is also one reason as to why it had always been a little off the scene; it was only a nuisance for the inhabitants of surrounding areas.

In the past, the local police had made many futile attempts to overthrow the gang which was gaining power in every sphere. In April 2016, however, a fresh attempt was initiated by the police department. The gang, hidden in their forested hideouts, was at an advantageous position and the police had to suffer high casualties. It wasn’t before the military intervention (April 16, 2016) bringing aerial strikes and a more defined strategy that the gang leader, Ghulam Rasool aka “Chotu” gave up along with his men.

The criminals in this country, as it has been made obvious, are far more strong and skilled than the main crime fighting bodies of the country. Chotu was mere a pawn in the bigger game that continues. There are a number of other gangs in the same region as well, which carry out similar organized crimes. In this context, it is of prime importance that the police department be upgraded in terms of strength and proficiency. Gangs similar to that of Chotu do not mature overnight; it takes years for them to gain power. If the capabilities of police department and its vigilance are upgraded enough to nip them in the bud, it may contribute largely towards minimization of crimes in the country.

The author is Research Analyst at FATA Research Centre.

[1] “Operation Launched against ‘Militants all over Punjab,’” The Nation, March 28, 2016. http://nation.com.pk/national/28-Mar-2016/authorities-hunting-militants-behind-lahore-blast

[2] Ali Cheema, Lyyla Khalid and Manasa Patnam, “The Geography of Poverty: Evidence from the Punjab,” The Lahore Journal of Economics, Special Edition (September 2008), 163-188

[6] An affectee shared this during an interview with the writer.

[7] “When Chhotus Turn into Frankenstein’s Monsters,” The Express Tribune, May 2, 2016. http://tribune.com.pk/story/1095865/when-chhotus-turn-into-frankensteins-monsters/