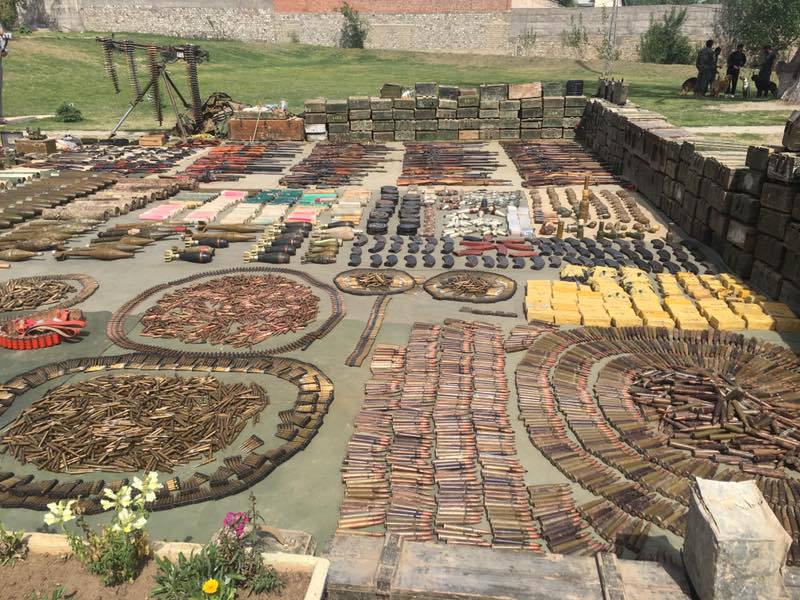 Kurram Agency – April 19, 2017: Security forces and Intelligence agencies with the assistance of Political Administration carried out a search operation in various areas of Upper and Lower Kurram Agency, as part of the nationwide Radd-ul-Fasaad offensive on 19th April. During the operation, arms and ammunition worth billions of rupees was recovered and displayed in front of the media. According to Col. Umar Malik, commandant Kurram militia and political officer Shahid Ali Khan all efforts are being made to protect the lives and wealth of people and to eliminate terrorists from the region. Seven Rocket Launchers, 24 Rockets, two Anti-Aircraft Guns, 50 Hand Grenades, and 400 mortar shells were recovered during the offensive, in addition to other sophisticated weaponry and heavy ammunition.

Briefing the media regarding the incident, Col. Umar Malik said that pertaining to the suggestions of traders and elders of the Agency they declared many sensitive and densely populated areas of the Agency as red security zones. Cars and motorcycles are banned from entering the red zone. Furthermore, for the security of the city, a 24km long trench has been dug up by virtue of which, many illegal routes have been blocked. The only way to enter the city is from the security checkposts. In the future, a ring road will be constructed on this trench for which, PC-1 has been prepared. He further said, “Anti Pakistan intelligence agencies are supporting terrorists and that security forces have an eye on such activities.”

Col. Yasir Bashir, Col. Ajmal, Col. Arshad, Maj. Taimoor and other security officials were also present in the briefing. They were of the view that extraordinary security measures have been taken for the security of not only Parachinar but the whole agency. It was further expressed that masses and elders of the agency should also join in the battle against terrorists and that the people of Kurram agency are contributing towards bringing stability in the region.