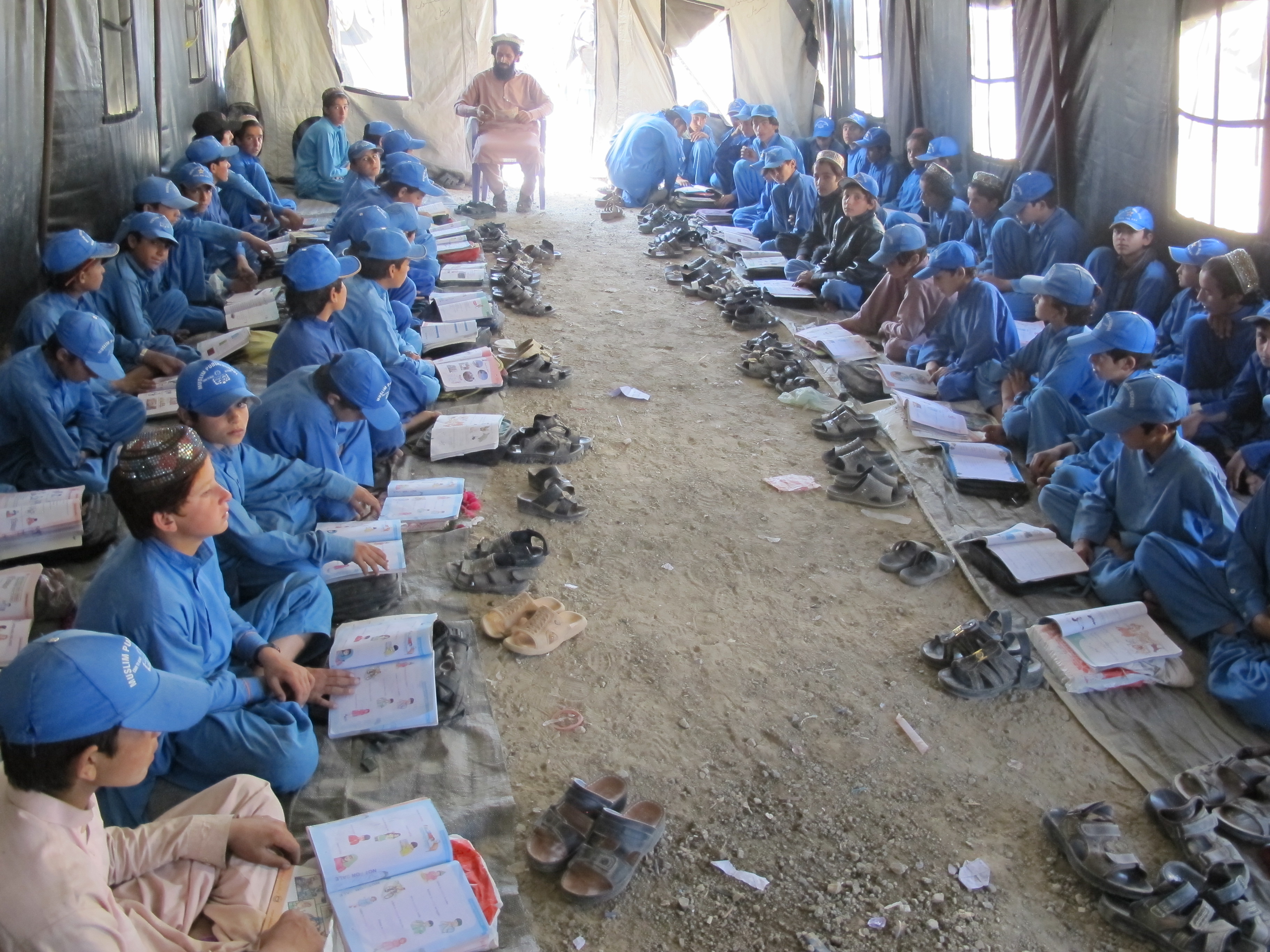 Quandary of Tented School in a Refugee Camp in Paktika

Monday, 16 December 2016, Paktika: Refugees hailing from North Waziristan Agency appealed to the relevant government authorities in Afghanistan to provide financial support for the tented school established in refugee’s camps in Birmal and Laman area of Paktika province of Afghanistan.  The tented school established by refugees on their own is the only source of primary education for 450 students of grade one to grade six in the refugee camp.

The detailed transcription of interview conducted by Ishtiaq Mahsud with the teachers and students living in a refugee camp in Pakitika province of Afghanistan is given below.

Muhammad Ali Shah, (Teacher). “I belong to Mada Khel tribe. When operation Zarb-e-Azb started, we migrated to this area (Birmal) because of its proximity to our hometown. We are inhabitants of Maizar in North Waziristan Agency. However, we were living in Shawal when the operation was launched, as we used to migrate to Shawal during summers. As a result, we decided to migrate to Birmal, as it was a feasible option for migration. Our major concern while migrating to Birmal was education. We didn’t want our education to be affected because we had established a good education system in Maizar; nevertheless, after the migration, our kids’ education suffered tremendously for over a year. Now, it has been a year that we re-established our school system here. We teach students belonging to Mahsuds, Sidgai, Warikai, Madakhel, Saipalai, Peepalai and all the tribes that migrated from Waziristan to this region. We didn’t want the lives of these children to be destroyed; therefore, we took this step and we established our school system with tents for roofs and ground for chairs. In Maizar, our school consisted of children from Madakhel. After migration due to Zarb-e-Azb, we waited for a year, before establishing our school system here, in hopes that peace would be restored and operation Zarb-e-Azb might end in our area. After a year, we realized that the operation might not end any sooner. Hence, we decided not to let our children’s education suffer any more and took the initiative to establish school system here. We bought the tents with our own money as we were not provided any external aid.

The total strength of our school is 450 and we offer education from 1st grade to 6th grade in our school. With the help of radio and T.V channels, we want to appeal the world that save our children from destruction because education is the only relief and way out for the people suffering all over the world. Likewise, the Pashtuns, in general, while the tribesmen of Waziristan, in particular, suffered vehemently due to the lack of education. Now that, with the grace of Almighty Allah, a wave of awareness regarding the significance of education is gaining momentum among our people, therefore, they are striving for acquisition of education.  We want the government of Afghanistan to support us and I believe that there should be no shame in that.

We teach 4th, 5th, and 6th grade in this (shows in the video) single room, although we should have had separate rooms for separate grades. Since we don’t have such facilities, we are teaching all these grades in a single room. We hope that with your help, our voices will be heard and these children will be provided with classrooms or at least more tents”.

Kamal U ddin (Student): “My name is Kamal Ud Din and I belong to Maizar, Madakhel tribe of North Waziristan agency. We migrated to this area because this was the closest safe area to our hometown. We couldn’t migrate to the plains in Pakistan because they were very hot during summers, while the long routes were hectic. We migrated to Laman due to the military operation in our area. We don’t care about the winters, cold or other problems that we might face, as long as our education continues without interruption; let that be in tents as we have no other place to study, but in these tents”.

Rafid Ullah, (A Student): “My name is Rafid Ullah and I have migrated to this place from North Waziristan Agency. I appeal to the governments of Pakistan and Afghanistan that they should provide us with facilities of education, similar to that of entitled to the children of Islamabad and Kabul”.