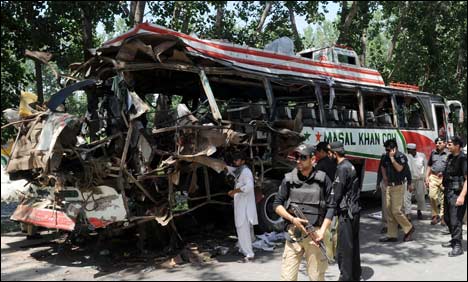 Charsadda, Sep 27, 2013: After the drastic attack on church, Peshawar came under an attack again when a remote control blast ripped through a bus near Naguman area on charsadda road on Friday.

According to the details:At least twenty people including women were killed; forty other women and children injured in the incident.Dead bodies and injured were taken to District Head Quarter Hospital Charsadda and Lady Reading Hospital Peshawar. Law enforcement agencies cordoned off.

Secretariat employees after winding-up their work were going back to their homes by a private bus when the bus reached near Gul Bela Naguman on Charsadda road a heavy blast took place.

Police officials told that the bus carrying more than one hundred secretariat employees and other passengers to Charsadda.

Inspector General Police Khyber Pakhtunkhwa Nasir Durrani while talking to media persons said that the unknown miscreants hit the bus carrying government employees from Peshawar to Charsadda at about 12.30 pm on charsadda road, He said that according to our investigations explosives were planted inside the bus which was exploded with a remote control device.

He confirmed 18 persons including women killed and 43others including women and children wounded in the blast. And said that Khyber Pakhtunkhwa is the front line province against the war on terror and its capital Peshawar lies on the edge of Pakistan’s tribal areas, the city has seen frequent attacks by militants in the past few years, with targets ranging from civilians to policemen and other law enforcement personnel. We have to unite to overcome targeting attacks and all the stake holders will show the unity.

Some eye witnesses told media that they were preparing for Juma prayer when they heard a huge blast and after the blast they only saw smoke everywhere and after that they saw injured lying in the nearby fields.

Assistant Inspector General Bomb Disposal Unit Shafqat Malik confirmed media persons that up to15 kg explosives were used in the blast which was packed for targeting secretariat employees.

ANP leader Mian Iftikhar also visited the spot and said government should take steps towards combating terrorism and added that the suggestion of setting up office of Taliban is a stupid one and beyond the logic.

It is pertinent to mention here that last year the same incident of targeting government employees took place on the same place.