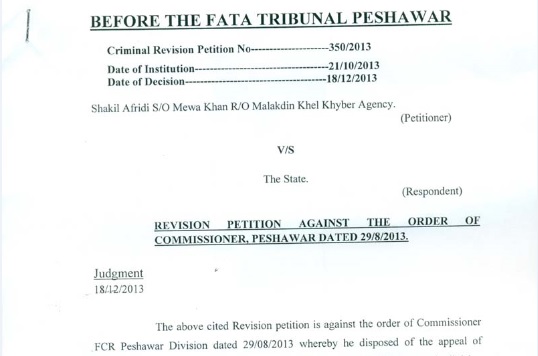 PESHAWAR, Dec 18: Federally Administered Tribal Areas (FATA) Tribunal on Wednesday dismissed the revision petition in Dr. Shakeel Afridi case , in which fresh trial and concession of bail was demanded, and was sent back to Commissioner FCR Peshawar for clearing the ambiguity in the petition, FRC has learnt.

The bench comprised of Shah Wali Khan, Chairman, Pir Fida Mohammad and Akbar Khan, as its members, gave the decision on the petition after hearing arguments from both the parties.

Samiullah Afridi and Qamar Nadeem Afridi, counsels for Dr. Afridi preyed to the tribunal for directing PA Khyber for re-trail of the case as well as granting opportunities of defending him and bail but were refused by the tribunal.

The incarcerated Dr. Shakeel Afridi in Peshawar Central Jail was convicted for his linkages with anti-state, Khyber Agency based, militant group Lashkar-e-Islam and was sentenced to 33 years imprisonment by a local tribal Jirga.

He was picked up by intelligence agencies in May 2011 from Peshawar for allegedly helping CIA for tracing Al-Qaida leader Osama Bin Laden who was killed in an operation by CIA in Abbott Abad in May 11th 2011.

The case got international popularity when USA demanded his release and termed him a hero for helping CIA for approaching the most wanted person.

On August 29, 2013 Commissioner FCR Peshawar Sahibzada Mohammad Anees, who died from severe burn injuries that he borne in an accidental fire that erupted in his flat in Islamabad, had overturned tribal court decision and had asked PA Khyber for the revision of the case.