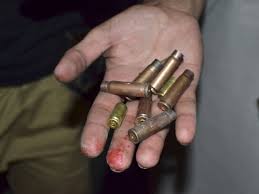 The deceased was identified as Maulvi Abdur-Raqeeb known as Abdullah, who was a former Afghan commander and Afghan Taliban Minister.

According to details the victim was riding a motorbike along with his student when unknown motorcyclist’s assailants opened fire on them while they were on way from a seminary located in Nasir Bagh to their residence. As a result of indiscriminate firing by attackers Maulvi Abdur-Raqeeb died on the spot while his student safely escaped.

Senior Superintendent of Police operations Peshawar Najeeb-ur-Rehman confirmed the incident and said that, “unidentified gunmen riding on motorbikes came and opened fire on them resultantly Abdur-Raqeeb died on the spot while his student remained unhurt in the attack”

According to details Police officials told that, “Maulvi Abdur-Raqeeb was running a seminary located at nasir bagh road in Peshawar, in afternoon he left institute for going back to home along with his student when he was targeted by unknown miscreants. The attackers managed to escape successfully after the attack”

Dead body of deceased was shifted to hospital and immediately search operation was launched in the area, however, till the filing of this report no arrests were being made.

Maulvi Abdur-Raqeeb known as Abdullah was an Uzbak Jihadist who joined Taliban movement in Afghanistan when Soviet Union invaded Afghanistan and obtained fame as a commander, in addition remained loyal Taliban movement till the end. Due to his faithfulness he was elected as an Afghan Taliban Minister during the era of Taliban empowerment in Afghanistan. Maulvi Abdur-Raqeeb also served as a Minister for refugees’ affairs of Afghanistan from 1994 to 2001. He was completely in favor of peace talks with President Hamid Karzai’s administration to end the Afghan insurgency.

It is worth mentioning here that, his support to Afghan peace and reconciliation process is reportedly a cause behind his assassination however until now no one has taken the responsibility of the attack.