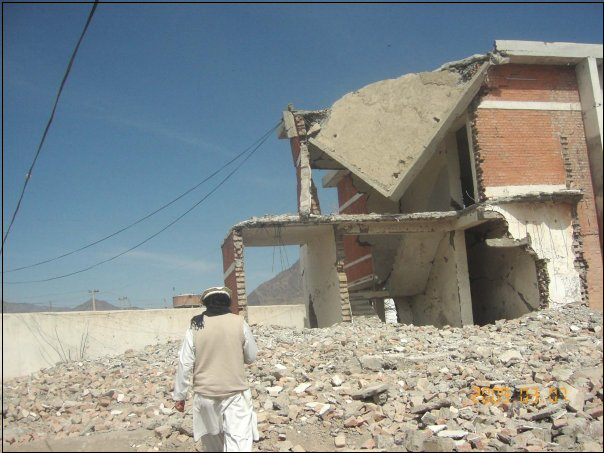 Government School Blown Up in Wana

Wana, June 11: The local Taliban, Wana Chapter, in South Waziristan Agency are creating hurdles for the area female students in getting education as here on the night between Tuesday and Wednesday unknown miscreants blew a government run seminary in Janan-Kot, a small village in Karry-Kot area of Tehsil Wana. The entrance of the school and three adjacent class rooms collapsed completely in the blast, FRC learnt.

According to details provided by the local political administration no human loss has been reported in the incident.

The blast happened at midnight about at 1am.

“The building of Government Girls High School Karri-Kot has been blown up by unknown miscreants here during late hours however it was fortunate that no human loss has reported”, said an official of local political administration.

The militants warned the school watchman to leave the building otherwise he might lose his life also.

The government has an established writ in the area however influence of a local militant commander, Commander Aain Ullah, has been observed in the public affairs of the area. Areas of tehsil wana that lies at border with tehsil Bermil are few to mentioning that are considered to be under the influence of the mentioned militant commander.

After a military offensive in the agency back in 2007, the government nominated few commanders of Peace committees’ in areas of South Waziristan Agency that lies close to neighboring Afghanistan to keep backing government orders and to prevent the area from militant anti-state activities. Since then militant commanders enjoys considerable say in the public affairs of these areas and few of them, commanders, had died but were succeeded by their heirs to keep intact their entity.