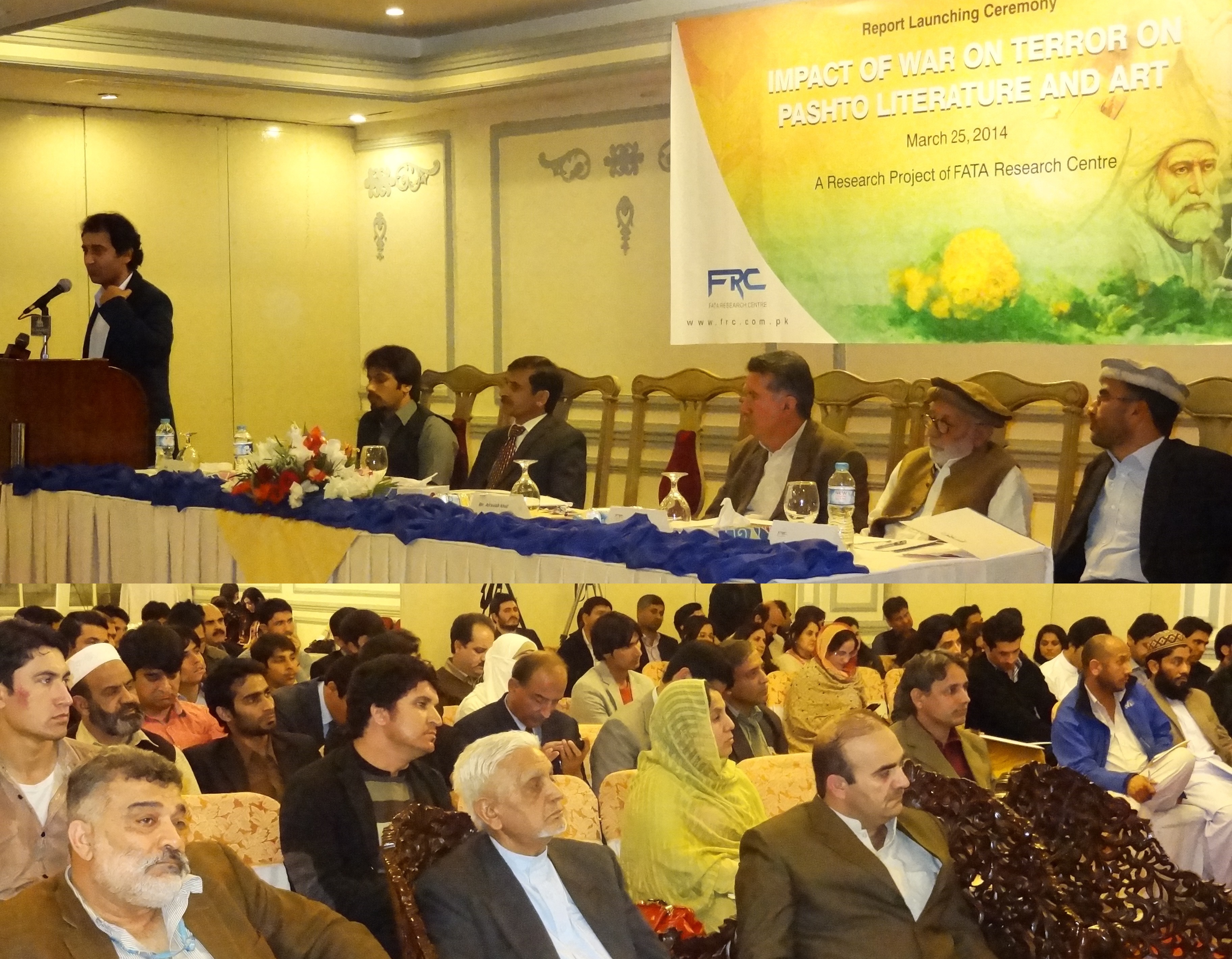 Role of Literature and Art in Peace Building in FATA

Islamabad, Mar 26: Literature and Art can play a pivotal role in building peace and bringing reconciliation to the war-torn federally administered tribal areas of Pakistan. Promotion of literary societies, literary activities and providing patronage to writers can be instrumental in redirecting the war affected tribal people to ponder and work for a positive goal.

This was the crux of the speeches delivered at an event organized by FATA Research Center (FRC) in connection with the launching ceremony of a research study titled ‘Impacts of War on Terror on Pashto Literature and Art’ at a local hotel here on Tuesday. Renowned writers, politicians and academicians attended the event.

Minister for education KPK stressed upon the need to devise a strategy for preservation of our cultural values and traditions that could be fruitful for our generations to come. “We have to work on devising a comprehensive strategy, upon all Pashtun stakeholders consensus, that should covers and protect our Pashtoon culture and values”, said Mr. Atif.

Senator Afrasiab Khattak talked about the intrusions Pashtun nation has suffered since many decades at the hands of foreigners. “I can’t termed these intrusions as coincidence of history, rather were brought in through a systematic channel with specific objectives”, said Afrasiab Khattak.

Mr. Khattak further went on to say that our nation is suffering from inappropriate strategies of government of Pakistan, “State of Pakistan has so far failed to devised a clear counter-militancy strategy in our country which is a moment of sorrow for all of us, particularly to Pashtoon community”, added Senator Afrasiab.

Secretary General Progressive Writers Association Pakistan, Prof Mohammad Hanif Khalil highlighted the strategic importance of Pashtun belt and the repercussions the South Asia will have to face if it gets disturbs. “Unless and until Pashtun belt remains disturb, peace to South Asia can’t be achieved and will remain a distinct dream”, said Professor Hanif Khalil.

The survey shows that Taliban do not enjoy a good reputation among Pashto writers and literati. Before 2001, some Pashtuns were in favor of Taliban and few writers also supported them in their writings. But after 9/11 and emergence of militancy in FATA, Pashto writers, mostly, turned against them and began writing against them.
Responding to the question whether war on terror has affected Pashto literature, 91.2 percent respondents say that war on terror is related to Pashto language and many new terms like suicide bomber and drones entered Pashto language that were previously not even known to common people.

Earlier in his opening remarks, Dr Ashraf Ali, President of FRC, said literature depicted values and traditions of a society. “Society and literature affect each other and thus cannot be separated,” he said. The ongoing war on terror in the region and the violence, imposed on Pashtun society, introduced new elements in Pashto literature, he added.

“Literature and art are mirrors that we hold up to the society. These mirrors reflect our environment, collective values, traditions, practices and beliefs,” said Dr Ashraf.

Program Manager FRC, Mehran Ali Khan Wazir, stressed upon the media to play an effective role in countering militancy in the region. “Media strategies should be invented that can effectively counter jihadi literature and militants propaganda in FATA”, said Mr. Mehran.