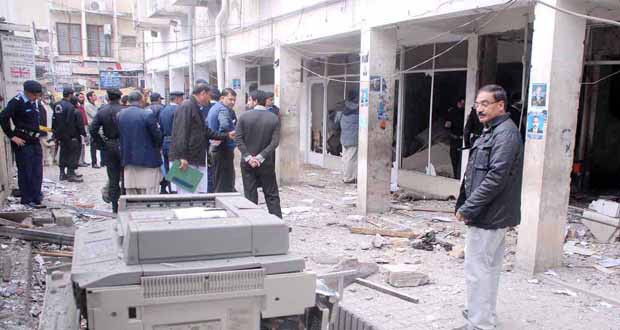 Miranshah, Feb 05: Tehreek-e-Taliban (TTP) has distanced itself from Islamabad suicide bombings here on Tuesday. TTP Spokesman made it clear that their Mujahideen are bound to follow Taliban Shoora (Taliban Grand Assembly) decision of unilateral ceasefire with the government of Pakistan.

“Till the further instructions from the organization’s Supreme Commander, Ameer, we are bound to follow the ceasefire decision”, Shahid Ullah Shahid said.

He went on further and said that no member of TTP was involved in Islamabad Session Court suicide bombing that happened on Monday.

“When we target we claim but in Islamabad Session Courts located in sector F-8 none of our fighter was involved”, said Mr. Shahid.

He urged the government of Pakistan to unveil the hidden forces behind these bombing and let the countrymen to know about the facts.

“It is primarily the government responsibility to arrest the culprits of Islamabad bombing and gave them severe punishment” and “If the government finds solid proofs showing TTP fighters involvement in it then our Ameer will decide about their punishment”, revealed further by Mr. Shahid.

He held that TTP abides by the rules of Shariah and will keep their struggle on for the noble cause while any deviation from the ceasefire agreement is, according to them,  against Islam and the Shariah. It merits mentioning here that TTP had agreed on a one-month unconditional ceasefire with the government on Saturday.