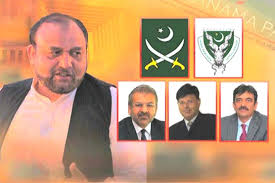 QUETTA: Three suspected terrorists were arrested and a cache of arms and ammunition was seized in the Killi Ismail area of Quetta and the Gawal Ismailzai area Zhob districts. According to the InterServices Public Relations, the public affairs wing of the armed forces, the action taken by the paramilitary Frontier Corps was part of the ongoing Raddul Fasaad operation. Dawn , The Express Tribune

RAWALPINDI: The federal government has directed the Punjab government to strictly ban fundraising by proscribed organisations and to monitor the activities of NGOs and other charities working across the province and initiate action against them under Anti-Terrorism Act (ATA). Dawn

Soldier Killed, Another Injured In IED Blast In Mohmand Agency

Mohmand Agency: One soldier was killed and another sustained injuries in a bomb explosion in Soran Dara area adjacent to Khowezai Baizai the border area of Mohmand Agency. Radio TNN

Bajaur Agency: Security forces claimed to have seized a huge cache of weapons, ammunition and explosives during an operation in Gat Agra area of Mamond tehsil in Bajaur Agency. Dawn

ISLAMABAD: The most powerful, and perhaps, most controversial joint investigation team (JIT) in the country`s history submitted its final report on alleged money laundering by the family of Prime Minister Nawaz Sharif to the Supreme Court. Besides other evidence, the report consists of the statements of PM Sharif; Punjab Chief Minister Shahbaz Sharif; the PM`s children Hussain, Hassan and Maryam Nawaz Sharif; son-in-law retired Captain Mohammad Safdar; PM`s cousin Tariq Shafi; friend Javed Kayani and Finance Minister Ishaq Dar, who is the father-in-law of the PM`s younger daughter. Dawn  , The News , Akhbar-e-Khyber

Khyber Agency:  In a bid to halt militants – disguised as students – from crossing into Pakistan, the political administration of Khyber Agency has announced special cards to be issued to students from Afghan border villages. The Express Tribune