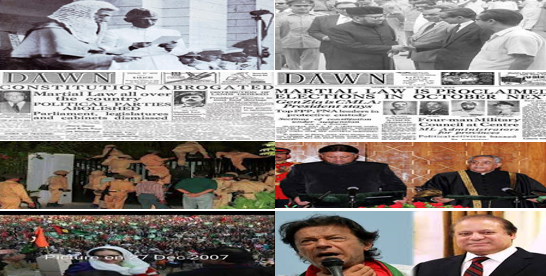 Power politics has always remained a dominant feature of Pakistani politics, which, in turn, strengthened a conflictual political culture in the country. Therefore, the political landscape of Pakistan, marked by institutional imbalance and a persistent struggle for power between political and bureaucratic sections, has always provided a vacuum to the anti-democratic forces to exploit the divisions and disparities within heterogeneous structure of the polity. In this context, the recent surge in political turmoil can be termed as a revival of the inherent practices in political arena of the country.

The political landscape of Pakistan, from the very beginning, has been concentrated by the landlords, businessmen and civil and military bureaucracies. On the other hand, the political leadership, which largely encompassed the people who migrated from the areas that were not included in Pakistan, had no roots among the masses. These aspects not only stimulated undemocratic norms in the political culture, but also led to the emergence of clergy as a strong pillar within the society of Pakistan. Winston Churchill, during a debate in the House of Commons in 1942, said that if British India “is granted freedom, power will go to the hands of rascals, rogues, freebooters; all leaders will be of low caliber and men of straw. They will have sweet tongues and silly hearts. They will fight amongst themselves for power…”[6] The political leadership of Pakistan has proved him right during the course of history.

The state consciously architected a political culture of power politics while accommodating certain segments of the society, castes and tribes, and ignoring the political parties, which are considered to be the most vital part of a democratic system. On the other hand, a dominant role of bureaucracy – both civil and military – in the decision making process, instead of political actors, not only empowered the central government over federating units, but also resulted in weakening of rule of law attributable to the poor role of political class. Further, this setting promoted the undemocratic political culture and paved the way for intermittent periods of dictatorial role. Resultantly, a democratic political culture in which free and fair polls are held on regular intervals, fundamental rights are protected, constitutional breaches are not permitted and the political system corresponds to the people’s aspirations couldn’t thrive in the country. Conversely, a political culture lacking the democratic norms and values proliferated at national level and resulted in amplification of polarization among the masses at the grass root level.

Although political cultures are a dynamic phenomenon as propounded by political theorists, any rapid transformation can lead to the growth of conflictual circumstances; likewise, the continuous and prompt shifts in the political system of Pakistan, from democracy to dictatorship, mushroomed the conflictual political culture in the country. Polarization among the masses not only strengthened anti-democratic forces within the political structure but also stimulated institutional imbalance within the state structure. Different social groups, based on castes, tribes, ethnicities and linguistic identities, attached themselves to the dominant segments in order to pursue their own interests at the cost of national cohesion. Anti-democratic forces further exploited these diversities in order to consolidate their institutional authority. This, in turn, further weakened the already fragile political institutions while the political parties, which are considered pillars of a democratic polity on which the edifice of a nation rests, enfeebled during the course of history.

Political parties are conceived as barometers to measure the political temperatures within a society. They serve as a catalyst to spur the passive government institutions to function according to the desires and aspirations of the masses. However, owing to the heterogeneous structure of Pakistani society and institutional disparities, political parties have remained unable to attract the masses against undemocratic practices prevailing in political structure of the state. Moreover, the hegemonic and undemocratic character of political parties, with a few exceptions, have further augmented the distance between them and the masses. On the other hand, the socio-cultural differences within the society have contributed towards regional characterization of political parties. Thus, instead of functioning as a catalyst, these parties are not only augmenting antagonism among different segments of the society but are also being exploited by the powerful institutions to strengthen their influence over the political landscape.

Following the successive intervals of military and representative governments, a democratically elected government, during the elections held in February 2008, completed its term for the first time in the history of Pakistan. The transition of power from an elected administration to another representative government was taken as a ray of hope among the political circles in the country. It was presumed that, perhaps, the anti-democratic forces might have weakened in the context of security and political dynamics of the country. However, it proved wrong. Following the elections in May 2013, the political parties engaged in levelling allegations of rigging and electoral frauds against each other, a hallmark of electoral politics during the 1990s. The mudslinging by political parties and their leadership, like in the past, revived the conflictual political culture while offering a space to the bureaucratic institutions, who were already cautioned by the peaceful transition of power, to intervene and revive their position over the political terrain. Although a judicial commission comprised of three Justices, including the then Chief Justice of Pakistan, validated the electoral process in July 2013, the political leadership resorted to confrontational tactics. The political unrest, at that time, sought a horrible terrorist attack at Army Public School in Peshawar in December 2014 to calm dawn.[7]

The author is Research Fellow and Research Coordinator at FATA Research Centre .

[3] Daniel Judah Elazar, The American Mosaic: The Impact of Space, Time, and Culture on American Politics, (Michigan: The University of Michigan, 1994), 9-11.