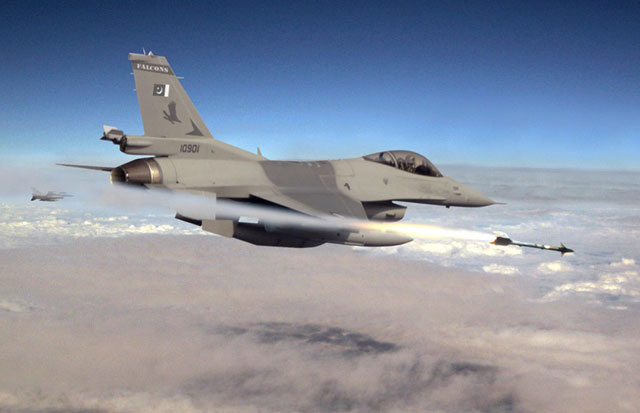 According to the military sources in these aerial bombardments nine hideouts of the militants were also destroyed.

The combat aircrafts supplemented by Army Aviation gunship helicopters targeted the mountainous areas of Shawal and the villages of Datta-Khel tehsil that lies near Pak-Afghan border.

The ISPR further reveals that air strikes that were carried out in the morning, at least eighteen militants were killed while thirteen others were targeted in the afternoon aerial assaults on the same day.

After clearing most of the main towns of North Waziristan, including Miranshah and Mirali, the security forces are now targeting the Shawal Mountains and Datta-Khel tehsil border villages. As the security circles believes that militants have fled the main towns of the agency due to the ongoing military operation and have taken refuge in the Datta-Khel and Shawal areas.

In an unusual move Ihsan Ullah Ihsan, official spokesman of Jamaat-Ul-Ihrar, called FRC from an undisclosed location and refuted the media and ISPR reports.

“The reports of inflicting heavy damages upon militants in recent air raids are baseless as the Army is now planning to win this war through media reports alone”, said Ihsan Ullah Ihsan.

He further said “Taliban fighters in the area are as strong as they were before the onset of Zarb-e-Azab military operation”.

Jamaat Ul Ihrar is a TTP splinter militant organization that emerged in the recent past. The new organization, headed by Omer Khalid Khurrassani and his deputy Ihsan Ullah Ihsan, has severe differences with the current leadership of TTP and their objectives.