South Waziristan, April 11: A pamphlet was circulated in the agency by the TTP high profile militant commander stating his future course of action while parting his ways with the central command of the banned Tehrik-e-Taliban Pakistan here on Thursday.

With the grace of Almighty, Tehreek-e-Taliban Pakistan has been fighting against the infidelities in the country for the past six years. In this struggle our fighters (Mujahideen) rendered numberless sacrifices for the achievement of our goals, and are doing so with sincerity; and hopefully we will succeed in it one day.

Me dears, I have to say it with immense sorrow that in spite of  moving forward, our movement is going contrary to purpose for which sacrifices have been rendered. Due to this advertent turn in the movement our goals are going far away to be achieved and the movement is heading towards its downfall. Our problems pertaining to discipline, mutual rivalries and other differences lead us from bad to worse.

I tried in the capacity of leader and member of the organization to alleviate these differences in the past seven months but failed to do so. Reasons were many but probably our own Taliban leaders and fighters came in direct conflict with me. I hereby render my resignation from the post of central Ameer of grand shoora in the greater interest of our organization and its members.

Also here I want to list down all those issues and reasons that compelled me to act so. Its description over here is meant to let others besides my organization members to ponder on and devise remedies for it in the future. This would also help us to avoid spoiling the sacrifices of Mujahideen:

2.       The central shoora is void of autonomy. The central leadership has forwarded in written that grand shoora can take decisions, vital for the organization, and we are having that written permission letter with us. When the grand shoora exercised their respective powers, immediately we received a letter from the management of the central shoora limiting our decision making powers by restricting us to only three areas.

3.       In the annual high level meeting of grand Shoora, the central Ameer in the presence of executive organ of Shoora, ordered the grand shoora to start working on the development of organs in Shoora. When we started working on the developments of such organs in the body and even we have established the political organ of the shoora then we received a message from the central command’s central Ameer,  that all the members of the political shoora belonged to ISI and he does not have trust upon them.

5.       The central command in the presence of executive branch issued orders to the grand sgoora to decide the terms of settlements with the Mehsud tribe and also they even dictated all the eight points of the pact but their later on decision of not accepting their own commitment was out of context.

6.       Central ameer did not meet the members of grand Shoora even once in two months time, but were noted having a number of with the locals.

7.       Kurram Agency negotiations/ dialogue were not handed over to Shoora members.

8.       Central command /ameer does not trust the members of shoora, and his demand from every member was to act as a spy for him, and if any one refuses to do so the next step was his sacking.

9.       The central ameer sacked the ameer of Grand Shoora without any reason and consultation.

12.     The grand shoora devised, on mutual consensus, a broadcasting department and laid down rules & regulation for it but the different organs of the organization refused to accept them.

14.   Grand shoora decided to arrange the safe hideouts for the mujahideen fighting in Khyber and orakzai Agency where mutual decisions would be arrived at for future policies but the decision were not accepted.

15.   Grand shoora demanded five people from each organ of the organization for the Koki Khel area of Khyber Agency but none complied with this demand.

16.   Shoora also demanded staff from all the departments of the organization to be placed in central, executive, political, judicial and broadcasting organs but the request remained un-accepted at yet.

17.   Central shoora choose “Zra Meena” area of Kurram Agency for the IDP’s of Aurakzai agency but the local members of the organization refused to accept it.

18.   As every organ/chapter of the organization has its own rules and regulation, one of the organ/chapter suggested to the central ameer/ command to adopt and apply a uniform system of rules around whole Pakistan. Central command/ameer rather to present this idea in central shoora discarded it straight away and termed it a Fitna (a source of conflict generation).

19.   The central command discriminates while dealing with certain chapters. So, every chapter has a unique set of rules and regulation for themselves. This was evident from South Waziristan chapter where the central command proposed and implemented a parallel system there.

20.   Members of every chapter have been confined to their territories and the centre is not taking care of their issues.

When I put an effort to reconcile these issues of the organization at large, I was tagged as having some personal and ulterior motives.

The honorable audience, it is a moment of great concern that at present we, as an organization, are going towards downfall as, at the same time, it has grouped into many factions showing no allegiance to the center.

Under these circumstances I cannot keep working with the Grand Shoora.

May Almighty help our Mujahideens in realization of the objectives for which they work!

(Ex-member of Grand Shoora of TTP) 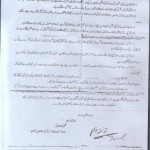 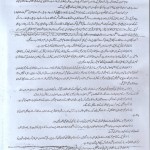 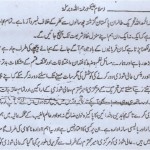