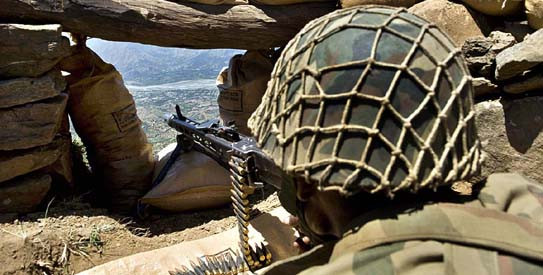 According to details provided by the local administration, a group of Afghanistan based militants fired several rockets and mortars at a check post of Frontier Corps situated at the border area of Matak, 40 km from the agency headquarter Khar. Resultantly one personnel of the security forces was wounded while three militants were killed.

The administration also confirmed the retaliation of Pakistani security forces and the exchange of fire between two sides that lasted for several hours.

No group has so far claimed the responsibility of the attack but the local administration has blamed Afghan based militants for the attack.

The administration and the security officials have launched an investigation into the attack. The security forces have also deployed more troops at several posts situated at the border areas of the region.

Meanwhile unidentified militants fired a rocket at a post of Bajaur levies forces in Yousaf Aad area of tehsil Khar on Tuesday night.

The administration launched a search operation in the area and arrested several persons under the collective responsibility clause of Frontier Crime Regulation.