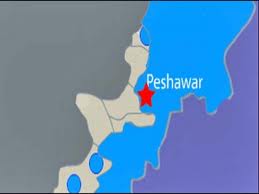 Peshawar, Feb 21: Peshawar metropolis was hit once again by terrorists wherein a bomb blast occurred in Hashnagri area of the city here on Thursday morning. As a result one person was killed while seventeen others were injured, FRC Field Reporter learnt.

According to details the miscreants had placed the bomb in front of CD and Mobile market located near Gur Mandi in Hashtnagri, a busy market of Peshawar.

The planted bomb went off around 11.30 am when commercial activities were on peak.

All the injured were rushed to Leady Reading Hospital for medical treatment. According to hospital sources conditions of a few were critical as they have received serious wounds.

According to police and officials of Bomb Disposal Unit the bomb weighted at least 1.5 Kg.

While talking to FRC, SP Peshawar City Khalid Hamdani revealed that according to intelligence information at least twelve terrorists have entered Peshawar city for carrying out terrorist activities.

“We have launched extensive search acting upon the tip of information and hopefully we will reach out to them”, said the SP.

“Our target is to prevent them from carrying out further terrorist acts in the Peshawar city”, Mr. Hamdani added.

In recent past the Taliban threatened the CD and Mobile shops sellers in Kharkhano market of Peshawar by distributing a pamphlet to stop selling obscene films and other unethical medicines. However, no terrorist group has accepted the responsibility of this attack till filling of this report.