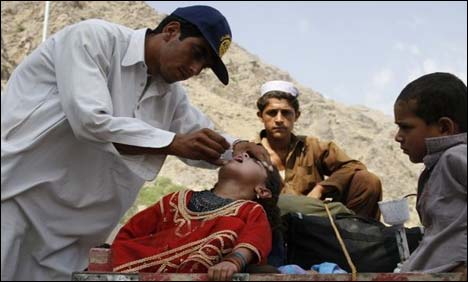 Children under 5 vaccinated in Kurram, Aurakzai and Khyber Agencies

ISLAMABAD, Sept 5: More than a hundred-thousand children below the age of five were vaccinated against the Polio virus in Kurram, Aurakzai and Khyber agencies on 3rd and 4th September in the two-day polio campaign in Federally Administered Tribal Areas of Pakistan.

Sources said that health authorities have achieved the targets made for vaccination of children in war-ridden remote areas of the FATA.

The recent polio cases reported in FATA had become a challange for health authorities. Pakistan is continuously under the pressure of world health program and donors organization for not eradicating the Polio from Pakistan yet in twenty-first century.

Health authorities found difficulty in convincing parents for the need of polio vaccination in previouis campaigns carried out in FATA but in the current campaign, the polio teams said that most of the families agreed to vaccinate their children against the polio for the first time.

In the previous Polio vaccination campaign Taliban commander Hafiz Gul Bahadar had announced ban over polio teams in the war-hit areas conditionally till the end of drone’s attacks in Waziristan agency.

Official sources said that group of Ansarul Islam in Khyber Agency agreed to allow the teams in the area to vaccinate the children against Polio. Sources added that the group was persuaded by the authorities about the importance of polio vaccination for the children of the area.

Polio campaign coordinator Shahnaz Wazir Ali said that all children except a few were approached by their teams and vaccinated against the virus in Kurram, Aurakzai and Khyber Agency.