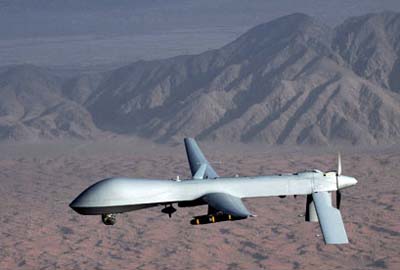 The drone fired two missiles targeting a vehicle and a motorbike near Pak-Afghan border.

The political administration of the agency has confirmed the incident.

“The UAV targeted a vehicle and motorbike thereby killing all the onboard people on the spot”, said an official of Political Agent NWA with the condition of anonymity.

The administration official however refused to add something regarding the identity of the deceased “two foreigners besides four local militants died in the attack”.

This was the first attack of the current month. In the previous month of October a total of seven drone attacks were recorded. Out of the total seven one was carried out in South Waziristan Agency while the rest were operated in different areas of North Waziristan Agency. Overall during the current year 2014, sixteen drone strikes have so far happened wherein fourteen were carried out in NWA while two in SWA.

The attack came at the moment when Pakistan Military has been engaged in operation Zarb-e-Azab since June 15, 2014. The UAV attack has been widely condemned by the foreign office of Pakistan as such moves undermines the efforts of the Pakistani security forces in the ongoing military operation in the agency.