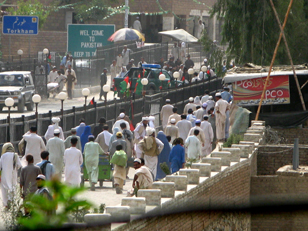 Entry without visas and passport banned at Torkham border

LANDIKOTAL Sep 13: Official sources said on Wednesday that FC personnel stopped the Afghan nationals from crossing the border without having any passports and visas at Torkham border.

Khasadar sources said that due threats of terror attacks in the steeled areas of Khyber Pakhtunkhwa, the security measures were beeped up for the cross border visitors while making  passport and visas compulsory for entry into Pakistan.

The patients going to Peshawar or other parts of the country for medical treatment were not included in this compulsion.

Local sources said that the authorities of Afghan border also stopped the traffic flow of the loaded and heavy vehicles from Pakistan’s side.

Sources added that transporters and other civilians who were crossing the border for their work in other parts of the country faced difficulties from both sides as they were not allowed form both sides to cross the border.

The issue was then resolved hours later when Pak-Afghan border authorities negotiated and solved the issue for the best interest of the people, official sources told the reporter.