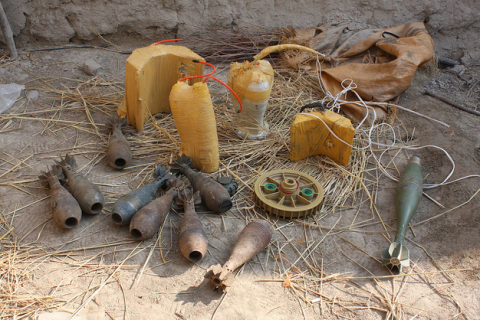 LANDIKOTAL June 14: A volunteer of Peace Lashkar died when explosive material planted on a roadside by unknown militants went off here on Saturday at Qamberabad area of Bara tehsil, sub-division of Khyber Agency, official and local sources told FRC.

Sources said that a member of Shalober Peace Committee was passing through the area when he hit a high intensity bomb that resultantly killed him on the spot.

Yet in another development from the area a massive search operation was launched in Jamrud tehsil of Khyber Agency on Saturday that was supplemented with curfew by the security forces creating hurdles for the commoners during routine lives.

According to details the search operation was initiated in Jamrud area owing to the worsening law and order situation.

Pak-Afghan road was completely sealed for all kind of movement due to forces search operation.

In yet in another incident three mortar shells were fired from across the border, Afghanistan, and landed in Speena Soka and Toormor areas of Loy-Shelman, the bordering area of tehsil Landi-kotal, however, no causality was reported, political official revealed.