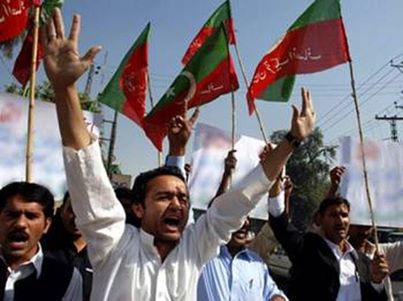 PESHAWAR, Nov 17: Pakistan Tehreek-e-Insaaf led Khyber Pakhtunkhwa provincial government here on Sunday decided to postpone the NATO supplies blockade schedule that was announced to be held on November 20 due to unstable security situation across the country particularly after the recent sectarian clashes in Rawalpindi.

The decision was taken in a meeting attended by the Provincial Ministers of PTI, Jamaat-e-Islami and Awami Jamhori Ittehad and was announced during a joint press conference in Peshawar held after the meeting.

The meeting decided to postpone the planned blockade till November 23 due to the recent resurge in sectarian clashes in the country while particularly in Rawalpindi on the occasion of Moharram Processions.

Addressing a joint press conference Jamaat-e-Islami Provincial secretary General, Shabbir Ahmad Khan, said that the sit-in was postponed in the wake of sectarian violence in Rawalpindi and fragile security situation of the country after the tragic incident.

“In the meeting it was unanimously decided to put off the scheduled date for NATO blockade for three days”, said Mr. Shabbir Ahmed Khan while speaking at the press conference.

The leaders in the meeting also made it clear that no one should think of its cancellations rather we are shifting the sit-in date. “We are firm on our agenda of sit-in but in light of the current security situation we consider it viable to put it off for few days”, added Mr. Shabbir.

Prior to this, Tehreek-i-Insaf Khyber Agency chapter held a protest demonstration in Landikotal against the drone attacks and showed their resolution to block the Khyber Pass for NATO goods supplying trucks on November 20. A large number of tribal people participated in the demonstration holding banners inscribed with anti-American symbols and chanted slogans against them.

The protest was held here on Sunday in front of Landikotal press club and was organized by Pakistan Tehreek-i-Insaf workers.