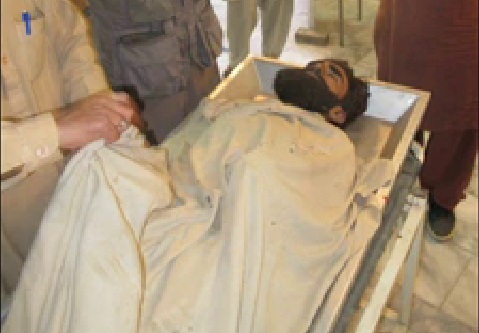 DI KHAN, March 12: An important commander of Lashkar-e-Jhangvi blew himself up in Draban area of District Dera Ismail Khan with a hand grenade when he was confronted with a police patrolling party, FRC Field Reporter learnt.

According to details the suicide attacker was identified as Qari Zahir alias Qari Zafar belonged to the district Muzaffargrah in Punjab Province of Pakistan.

Qari Zafar confronted with a Police Patrolling Party when he was entering into the jurisdiction of Draban Police Station of district Dera Ismail Khan from Drazinda area of FR D.I.Khan on Saturday evening.

The Superintendent of Police DIK, Khalid Sohail while talking to our reporter said that Qari Zahir belonged to Lashkar-e-Jhangvi and was in pursuance of conducting huge terror act in D.I.Khan.

“He belonged to L-e-J and was probably trying to conduct a huge act of terror in D.I.Khan”, Mr Sohail said.

“He hurled a hand grenade towards the patrolling party and with another blew himself up. He died of it while the police personnel luckily remained safe”, the SP added further.

Khalid Sohail further revealed that the offender was having close relations with Tehreek-e-Taliban Pakistan.

Qari Zafar was involved in a number of terrorist activities in Punjab and Khyber Pakhtoon Khuwa and was in wanted list of the Punjab and KP Police.