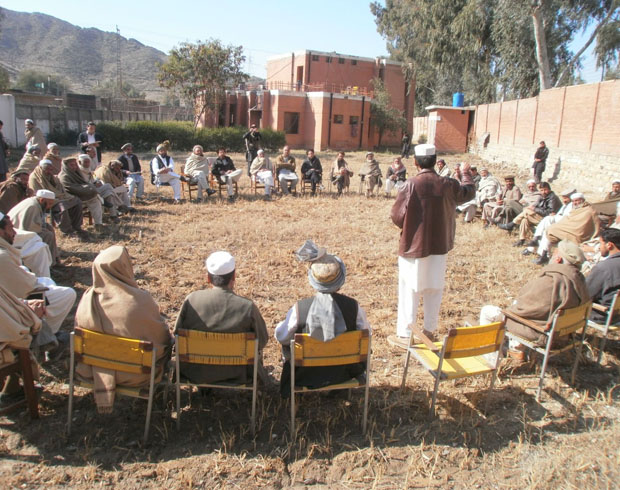 BAJAUR AGENCY, August 5: The tribesmen of Mamond tribe in Bajaur agency on Sunday assured the security forces of its full cooperation for the elimination of militancy and establishing government writ in the area.

The Tribesmen has made this announcement during a jirga with the senior officials of the security forces at the Damadola area of Mamound tehsil.

Besides elders of various sub-tribes, leaders, members of Mamond peace committees, operation in charge of the Pak army Brig Haidar Ali and others senior officials of the security forces also attended the jirga.

Jirga discussed law and order situation, statues of peace committees, anti-militants activities and tactics for keeping government writ in the Agency, which was cleared from the militancy after a successful operation by the forces with the efforts of the tribesmen.

“The historical actions of the locals and the forces had badly defeated the militants and now the entire region was under the control of the security forces,” said Brig Haidar Ali.

He further said that restoration of peace and writ of the government was a good achievement but the real job was to make it permanent. Militants were the big enemies of the nation who are still living across the border and this is a serious threat for peace and prosperity of the region, he added.

He urged the tribesmen to work for the larger interest of the area and said that this was the time the elders should play their role against the aggression of militants in the region.

“Fighting against the militants was not a tough task only committed, team spirit, courage and unity were the basic principles that could defeat militants’ aims,” he added.

He asked the elders to realize the responsibility of protection of motherland because being a tribesman maintaining stability in the region was the duty of every resident of the area.

He appreciated the efforts of Mamond tribe against the militancy in the region and said that the government and the security force appreciate the efforts and sacrifices of the elders rendered while defending the region.