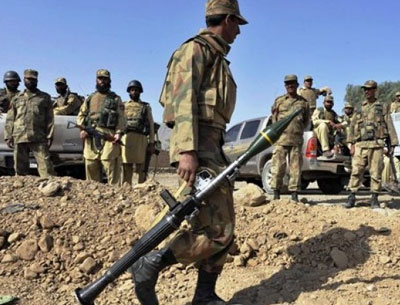 BAJAUR AGENCY, Sep 9: Security forces regained full control over Salarzai Tehsil after pushing the militants back from Batwar and other areas near Pak Afghan border after two-week long fight which resulted in 139 deaths and displacements of hundreds of local residents, official sources said.

An official of local administration told the reporter that security forces backed by the members of the Salarzai Qaumi Lashkar successfully pushed back all the militants to Afghanistan’s border and freed the areas they had controlled on after attacking several areas of the agency.

Sources said that hundreds of miscreants entered from Kunar province of Afghanistan  fled back after successful operations launched against them by security forces.“Militants gave tough time but finally we succeeded in our mission,” the official added.

The official said that the forces and the volunteers of the Salarzai Qaumi Lashkar have established several posts in the area that had been cleared from the militants and beefed up the security along the border areas for being alert incase of any such kind of other attack.

Meanwhile, Tehrik-e-Taliban (TTP) Pakistan confirmed that its fighters had vacated the Salarzai region of Bajaur Agency. TTP spokesman Ehsanullah Ehsan while talking to the media from an undisclosed location said that the Taliban had vacated the border areas in the larger interest of their movement.

He said that leaving the area was the part of their strategy and their fighters would soon attack Salarzai Tehsil again, he added that next attack would be stronger than the past ones.

The local said that all people who were trapped in the areas had been rescued and shifted to their homes safely.

As many as 87 militants, 18 security personnel, 14 volunteers of the local peace committee and 20 civilian including 8 women and 6 children have been killed and several injured in the two weeks long clash between the militants and the security forces in the several Border areas of Salarzai tehsil.

The fight had begun when hundreds of militants entered from Afghanistan’s Kunar province to Pakistani territory at August 24th in morning. Militants had taken control over several border areas of the agency after attack.