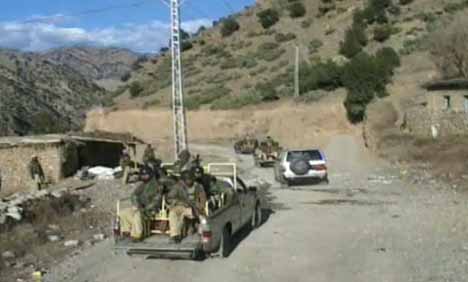 Kalaya, June 11: The security forces after being engaged in military operations against militants for two years in Orakzai agency, particularly in upper Orakzai, succeeded in clearing most parts of the agency from insurgents, FRC learnt.

Security forces had launched operation against militants in Orakzai Agency in April 2010. The initial targeted areas were Andkhel, Utman Khel, Baizoot and Feroz Khel areas of lower Orakzai division. These areas lie in the north of lower Orakzai and borders Khyber Agency. The forces cleared these parts from militants after fierce battles which also inflicted high casualties on both the parties.

However a strategically important position named Khawa Darra located in Utman Khel area remained the hub of militant hideouts. The strategic location of this area let the security forces debarred from entering, as its altitude was too high while on the other hand it was bordering rugged and hilly areas of Khyber Agency. Militants were taking advantage of the location and used to hit military from the adjacent Khyber Agency hill tops.

The military operation in lower division of the agency compelled the militants to flee to the adjacent Khyber Agency’s Tirah valley and central Kurram of Kurram Agency from where they kept creating troubles for the military by attacking its check posts and convoys with missiles. Similarly from Mamuzai area, located in upper orakzai division (bordering Kurram Agency), militants continued their attacks on the security forces.

This led the forces to launch operations both in central kurram and Tirah valley in Kurram and Khyber agencies respectively where according to the latest reports militants are on the run.

Though the security forces operations have cleared most of the areas of Orakzai agency from insurgents but still there are some areas where Taliban presence has been felt. These areas includes; Chapper (close to Hangu district)in central Orakzai and Ismail zai Tehsil of Upper division, but due to the lack of strategic importance of these areas, the locals argue, that the militants are leaving the areas themselves.

The military operation conducted in upper Orakzai area has caused huge displacement of masses. The people in camps are desperately waiting for the green signal from security forces deployed there. Overall the security situation these days is normal with slight disturbances in remote areas however the command is in the hands of stationed Pakistan security forces.