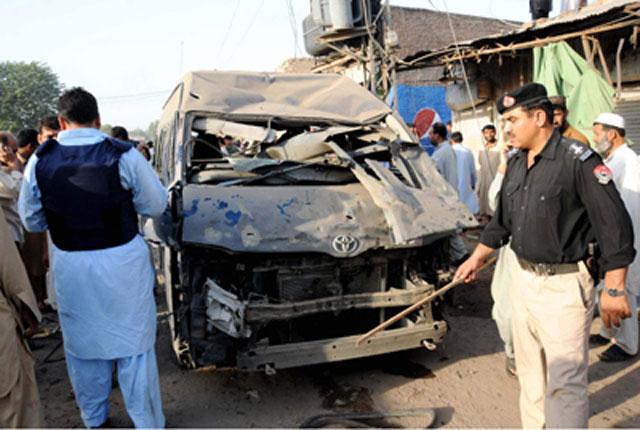 BANNU, Mar 13: A police vehicle came under attack in jurisdiction of Thana Saddar Bannu here on Tuesday evening when a bomb planted in a motorcycle went off killing two civilians and injuring seventeen others, FRC Field Reporter learnt.

According to details, the police van was on its routine patrol in the area when an implanted bomb went off. The dead bodies and the injured were shifted to District Hospital Bannu. The injured include a woman and two police officials.

The hospital sources said that the condition of injured persons were stable while the dead bodies were handed over to their family members after postmortem.  The killed includes a father and his son. They were identified as Mohammad Shahab, 6, Son of Dil Nawaz. Both died on the spot. The father was carrying his son on a motorbike back to home from school.

When DSP Bannu Police, Shabbir Khan, was contacted by our reporter in this regard he confirmed the incident and the casualties therein.

“This was a remote control bomb that was planted in a motorcycle standing in the Thana Saddar Jurisdiction”, said DSP Shabbir. “Two police personnel besides fifteen civilians sustained injuries in the blast”, added further by Mr. Khan. He added further, “According to Bomb Disposal Unit reports the explosives were of three to five Kilograms”.

Soon after the incident the nearby markets closed down in panic and the area was cordoned off by the law enforcement agencies.

Bannu has been subject to terrorist activities in the past that has witnessed a major attack launched by Taliban on 15 April 2012 on Bannu Central Jail. Around 400 prisoners escaped from the jail in the incident including  a former Pakistan Air Force technician ‘Adnan Rasheed’ who was on death row after convicted by a Field General Court Martial for engineering attack on then military ruler General Pervaiz Musharraf in Dec 2003.