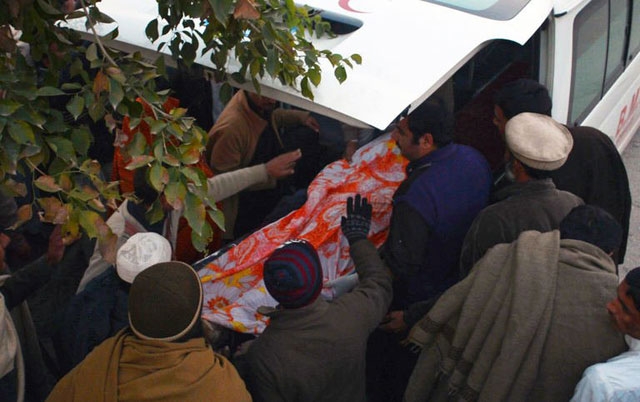 Peshawar, January 02, 2013: Unidentified armed men killed seven social activists participating in polio vaccination in Swabi district of Khyber Pakhtoonkhuwa on Tuesday when they were on their way back home from a local community centre, FRC learnt.

According to details six out of the seven killed were female while one was male. The driver of the van has received bullet injuries and is under treatment at Bacha Khan Medical Complex. The death toll has been confirmed by a Police official.

Five women were school teachers, the sixth was a health worker and the man was a health technician, a Police official said.

The matter has been taken up by the police and it is investigating to check possible links of the incident with the Taliban or other outlawed outfits operating in the area.

The police official clarified that all the victims were locals and were working for a health and education charity program that runs a school and health centre in the area.

“Four men came on two motorbikes and attacked the van carrying the staff. They opened fire right and left of the van and managed to escape from the scene successfully”, Syed Abdul Rashid Khan, Swabi District Police Officer said.

The police official further added that “the deceased women were aged 20 to 35 while the male health technician was 52”.

When this FRC Field Reporter contacted the concerned doctor at Bacha Khan Medical Complex Doctor Mohammad Sheereen, the doctor stated that the condition of the wounded driver is precarious as he has received a number of bullet injuries.

As yet, nobody has taken responsibility for the incident.

Javed Akhtar executive director of the charity said that the organization had not been threatened by any one despite working on polio immunization.