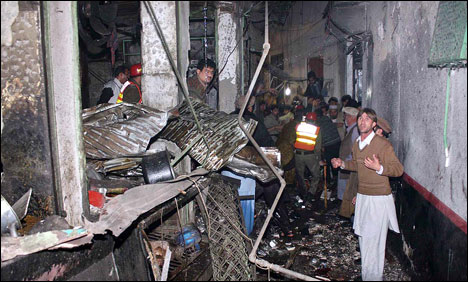 Peshawar, Feb 05: At least eight persons were killed and more than forty sustained serious injuries when a suicide bomber blew himself up here on Tuesday in Pak hotel at historical Qissa khawani bazaar of Peshawar, FRC learnt.

According to details, the incident took place in a shia dominated neighborhood of Peshawar in a local hotel of Kocha Risaladar in the area of famous Qissa khawani bazaar.

Police officials said that, “on Tuesday night people gathered in dining hall of Pak hotel for dinner when a suicide bomber entered in hotel and detonated explosives attached to his body. As a result eight persons died while more than forty including woman and children sustained critical injuries”

Confirming the death toll, Police officials said that, “Most of the deceased and wounded were Ehal-e-Tasheeh”

Police officials further added, “The deceased shia persons were identified as, six persons were from Parachinaar, while two others were local residents of Peshawar”

Soon after the incident Law enforcement agencies and rescue teams rushed to the spot and shifted the injured to lady readying hospital.

“Emergency was declared in the hospital, as most of the injured persons were in critical condition”, Hospital administration told.

Shafqat Malik, an officer of Bomb Disposal Squad (BDS) while talking to FRC reporter confirmed the incident and said that, “it was a suicide attack and the bomber blew him inside the hotel”

It is worth mentioning that, A Shia leader of Tehreek-e-Nifaz-e-Fiqa Jafaria (movement for implementation of Jafaria Jurisprudence) Asghar Hussain was killed in Qissa khawani bazaar just few hours ago before the disastrous suicide attack in the same area.

Moreover, In Past the area of kocha Risaladar was targeted by miscreants in 2010.