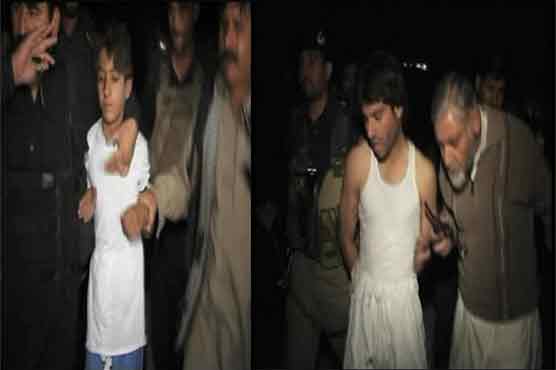 Suicide bomber and his accomplice arrested in Peshawar

PESHAWAR, Oct 21:  A suicide bomber and another co-accused were arrested by Peshawar police in a search operation.

According to a police source, suicide bomber Bilal, 13 years old, belong to Qamberkhel area of the Bara, tehsil in Khyber Agency and a coconspirator, Jehangir, 22 years old, belonging to Momen Town in Peshawar were apprehended at around 07:00 pm on Tuesday night.

Both the suicide bomber and the co accused were travelling on a motorcycle in the area of Lala Khan on Bara-Peshawar road near the Khyber Agency border and were attempting to use the darkness of the night as a cover, Sarband Police added.

According to the official of Sarband Police Station, after his arrest suicide bomber Bilal was crying. “We are not suicide bombers. Someone has made me wear this suicide jacket forcefully. We are not doing it”. The police responded swiftly and arrested both individuals on the motorcycle.

According a police source, near the old Bara security check post, police rushed to arrest the teenager while listen to his cry. The suicide bomber attempted to escape, but was arrested when police physically forced him to lie down on the ground. “Don’t come near to me, I have the bomb,” Bilal warned the police. “The accomplice Jahangir had the suicide jacket trigger device,” a police high official revealed. He added that policemen snatched the trigger in a very witting exercise.

Security officials cordoned off the area and called the Bomb disposal unit. After an hour, the police managed to diffuse the bomb. Both accused are currently detained at an unknown location for further investigation.