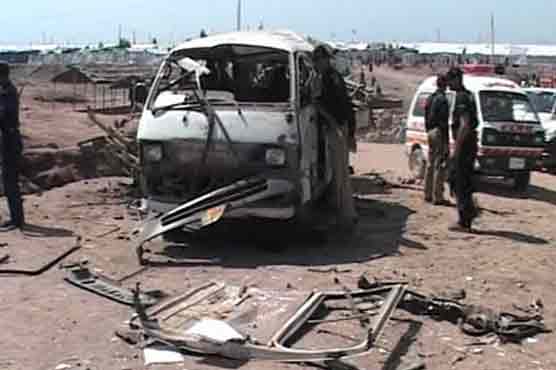 Peshawar, March 21, 2013: At least twelve people including one policeman and women were killed and more than twenty five sustained injuries in a car bomb blast in the internally displaced persons (IDP’s) camp in Noshera district of Khyber Pakhtunkhwa on Thursday (today).

The blast occurred in front of distribution point of the World Food Program (WFP) where IDPs were receiving food package for their families.

The injured were shifted to District Headquarter Hospital Noshera and Lady Reading Hospital Peshawar where most of them were reportedly in serious condition.

According to police and eye witness Farooq working for a local NGO in the camp, the blast occurred in front of the distribution point 1 in the camp near the administration block. A large number of IDPs were present to collect their food package when a blast occurred in the vehicle.

As a result of this blast twelve persons including a policeman, women and children killed and 25 others sustained serious injuries. The blast damaged nearby tents and 12 vehicles.

The Deputy Commissioner Noshera Glulam Mohammad while talking to media confirmed 12 deaths and injury of 25 people.

The Leady Reading Hospital administration confirmed 5 dead bodies including the Promotion Officer Humera working for a local NGO. According to bomb disposal squad about 35 kilo explosive was used in the blast.

While talking to media on the spot the Deputy Commissioner Noshera Ghulam Mohammad said that it was a time bomb in which 35 KG explosive was used by the miscreants.

Many among refugees in this IDP camp belonged to Khyber and Orakzai agencies. Previously this camp was also used for to provide shelter to Afghan Refugees.