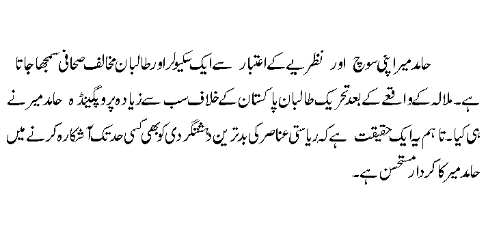 TTP Condemned the Media Role and Attack on Hamid Mir

Miranshah, Apr 21: Tehreek-e-Taliban Pakistan Central spokesman has condemned the recent life taking attack on Hamid Mir, a senior Journalist, in Karachi metropolis and appreciated his limited role in revealing facts of certain untold stories of unjust atrocities in the country. The spokesman has also condemned the role of media in Pakistan in making a public opinion that doesn’t match the ground realities.

The role of Hamid Mir in exposing certain hard realities during militancy needs consideration despite the fact that he has been busy in creating anti-taliban propaganda in the country particularly after Malala incident.

“Though Hamid Mir was ideologically anti-Taliban and a secular journalist but still we admire his limited role in unveiling few stories showing the truth to the people”, said Mr. Shahid.

The spokesman has blamed and condemned the role of media outlets of the country by not showing the masses the real picture of the scene despite knowing all the facts.

“When it comes upon them, media, they raise their voices in defense but when someone else, Taliban, suffers at the hands of unknown actors then they neglect and terms it the aggressor legal and constitutional right despite knowing all the facts and figures”, Shahid Ullah Shahid said in the pamphlet.

“The Pakistani media must change its dual standard role and should let the people of the country to know actual figures behind stories”, and “though the media has raised their voice in defense quite late but still we consider it a good omen”, the spokesman has added further.

The spokesman for the organization urged the people of Pakistan to stand unite against all those hidden elements that are planning for the division of Pakistan.

“All hidden hands responsible for targeting our holy places, media men and public places must be brought into limelight so that we can prevent our country falling into pieces like the past ”, the spokesman has urged.