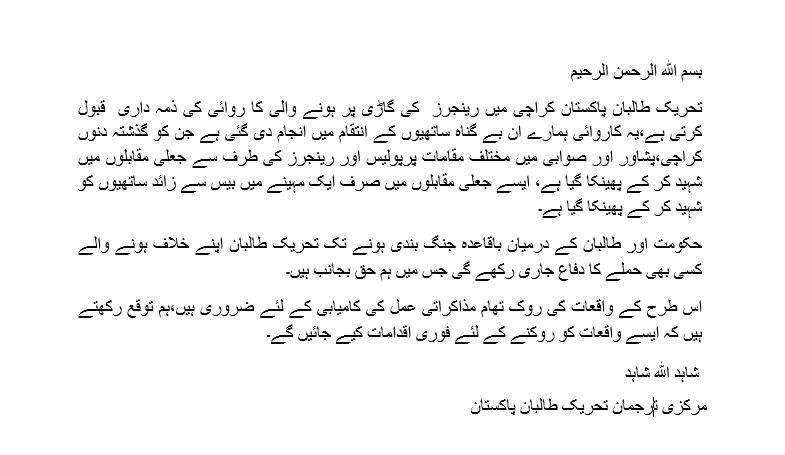 Miranshah, Feb 14: Tehreek-e-Taliban Pakistan has claimed the responsibility of deadliest attack on Police vehicle in Karachi here on Thursday in which thirteen people were killed and more than forty were injured.

Spokesman for the banned organization, Shahid Ullah Shahid, said it in a written statement sent to FRC.

“It was our fighters work in avenge of our commanders that were killed brutally by Police in fake encounters across the country”, Shahid Ullah Shahid said in the pamphlet/statement.

Initially Ameer-e-Tehreek-e-Taliban, Mohmand Agency Chapter, had strongly condemned such mysterious killings of their important commanders across the country including Karachi, Peshawar and Swabi.

In the latest statement spokesman for TTP has repeated the same stance and urged the government of Pakistan to show utmost patience at this critical moment when peace talks have been underway.

“In a span of one month, more than twenty important TTP commanders, confined in different jails across the country, have been martyred by law enforcers in fake encounters”, Shahid Ullah Shahid revealed.

He further added that, “Until a formal ceasefire commences between the government and Taliban, TTP has every right to defend itself and respond to each and every attack carried out against them”.

TTP Spokesman gave a message to the government of Pakistan to show utmost patience and avoid repeating suchlike incidents otherwise negotiation process is bound to collapse.