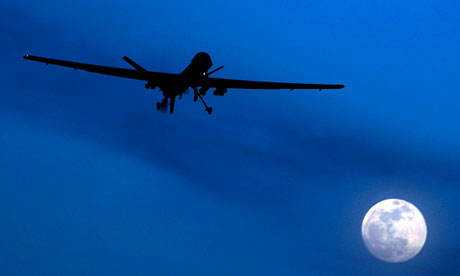 US drone in SWA; killing at least fifteen Taliban

According to details three different strikes were made by US unmanned vehicle in Bobar area of the agency by targeting three different hideouts of suspected Tehreek-e-Taliban Pakistan.

The local political administration official, with the condition of anonymity, told FRC reporter that at least fifteen Taliban were killed in the attack.

On 3rd January the TTP commander Mullah Mohammad Nazir was also killed in a drone strike in Sraa Kanddah, a subdivision Wana.

In the meanwhile, Ahmadzai Wazir, Suleman Khel and Dotanni tribes on Saturday demonstrated against the killing of Mullah Mohammad Nazir in the drone strike.

The rally gathered at morning in Wana Bazaar and left for Azam Warsak at 10am. Later on, the rally held their demonstration at Dzha Ghundai area, which lies between Wana and Azam Warsak.

The protest demonstration was attended by a large number of people including the elders of the above said tribes.

Malak Shireen Jan of Ahmadzai Wazir while speaking at the occasion paid a tribute to Mullah Nazir and said that he was an apostle of peace for the whole area while “the US Number 1 terrorist”, he declared.

Maulvi Mohammad Alam, who was Chief Minister during Taliban’s era in Afghanistan, presented a resolution against drone strikes.

The resolution reads, “We demand of the United Nation to stop drone strikes in the tribal belt of Pakistan forthwith. We also demand of the Army Chief General Ashfaq Pervaiz Kiyani to remove all the government servants serving in the area who are creating troubles in the way of peace making in accordance with peace treaty inked between Ahmadzai Wazir tribe and the Government in 2007”.

Seliab Mehsud FRC field reporter added that a cousin of the banned Tehrik-i-Taliban Pakistan’s chief Hakimullah Mehsud was also among the militants killed when US drones attacked compounds in the Bobar area of South Waziristan on Sunday.

One of the destroyed compounds belonged to Punjabi Taliban leader Qari Imran.

They said the dead included Wali Mohammad Toofan, a cousin of and close aide to Hakimullah Mehsud. Toofan had been recently elevated to head TTP’s ‘Fidai wing’ after its leader Qari Hussain died in a drone strike in Mirali, North Waziristan. The father of Qari Hussain, Muhammad Yasim was also killed in this attack.

Nine were identified, among the killed militants, who includes six Mehsud, two Wazir and one was of Dawar tribe. Mehsud were buried in Bobar area while the other three were buried in their respective areas.