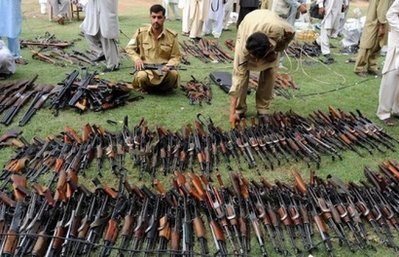 BAJAUR AGENCY, March 11: The security forces claimed to have seized a huge cache of weapons and ammunition during a joint operation by the security forces and Bajaur Levies force in border area of Mamond tehsil in Bajaur Agency on Saturday evening, FRC learnt.

Officials of the security forces told FRC that the security forces with the help of Bajaur levies force launched search operation in the border area of Tera Bandagi of tehsil Mamond, 42 km from the agency head quarter Khar, on a tip off local defence committee members.

The officials said that a big cache of arms, including weapons and explosives materials, were recovered during the joint action.

Meanwhile the local administration in collaboration with tribal elders and members of local peace committee has started its investigation to find out culprits behind it.

“Although we have started investigation about the matter but according to initial reports militants can be responsible for concealed of weapon which could be used for terror acts in the area,” added the official.