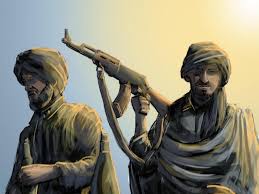 Kurram Agency – May 12, 2017: Pakistani security forces foiled a major terror bid in the Kurram Agency by destroying a vehicle filled with explosives, while it was trying to enter Pakistan from Afghanistan. In a statement to the media, Shahid Ali Khan, the Assistant Political Agent of Kurram Agency, said that terrorists onboard an explosive-laden truck attempted to enter Kurram from adjoining Paktia province of Afghanistan to target a ceremony of Jashn-e-Zahoor-e-Imam Mehdi held at an Imambargah in Parachinar, headquarters of Kurram Agency. The truck was intercepted during which it blew itself up.

The procession regarding Jashn-e-Zahoor-e-Imam Mehdi was organized by the predominantly Shia community of Parachinar and was attended by renowned religious scholar, Allama Jausad Naqvi. It is also important to mention that the Pakistan-Afghanistan border openings in the Kurram Agency are closed for traffic since 26 February 2017 due to security threats.