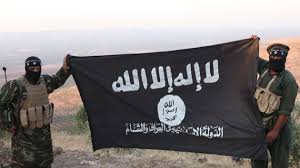 Islamic State [IS or ISIS], which emerged in Iraq in mid 2014 with an aim to unite all Muslims countries under one single Islamic State or Caliphate, is headed by Abu Bakar Baghdadi. In no time, the self styled Islamic State [ISIS], notorious for its brutalities and inhuman terrorist activities, was successful in making inroads into Syria and now it controls large areas both in Iraq and Syria. It is also infiltrating into the other Arab states like Saudi Arabia where they have already claimed responsibility for several suicide bombings in which a number of civilians were killed.

After consolidating its position in the Middle East, ISIS militants are now trying to penetrate into the so-called Khorasan region [Pakistan and Afghanistan]. Since early 2015, ISIS militants are trying to gain the support of the Pakistani Taliban and civilians through the distribution of jihadi literature i.e. pamphlets containing ISIS message of Jihad, video messages, wall chalking etc. On several occasion, Pakistani police and intelligence agencies have confiscated ISIS pamphlets written in Dari, Pashto and Urdu.

Although ISIS is relatively novel phenomena in Afghanistan and Pakistan, its presence and influence is growing day by day. An important development in this regard was the swearing of allegiance of six senior and important commanders of TTP [Tehreek Taliban Pakistan] to ISIS in late 2014. Moreover, the escalating number of terrorist incidents carried out by ISIS militants in both tribal areas [FATA] and other cities of Pakistan also manifest the penetration of ISIS and its increasing operational capacity in the region. For instance, Pakistani government claims to have arrested several ISIS militants involved in the Safora bus attack in Karachi in mid-2015 where dozens of Ismaili community members were killed. Likewise, in September 2015, ISIS claimed responsibility for two terrorist incidents against security forces and peace committee members in Damadhola area of Mamond Tehsil and Arang area of Utmankhel tehsil of Bajaur Agency.

The Pakistani government authorities have been proactive in countering the emergence of ISIS in the region. For instance, it is said that the military operation Zarb-e- zab was initiated against both local and foreign militants with an aim to restore government writ and control in tribal agencies, particularly in North and South Waziristan [the stronghold and breeding ground for both local and foreign militants], so that ISIS could not establish itself in these two agencies. To avoid the consequences of the intensive military operations, Zarb-e-Azab in North Waziristan and South Waziristan and Khyber 1&2 military operations in Khyber Agency, militants present in tribal agencies have fled to safer abodes in Afghanistan, and according to FRC sources many militants of TTP and Gull Bahadur group of North Waziristan have joined ISIS in Afghanistan.

In the context of growing presence, influence and operation capacity of ISIS in the region, it is pertinent to mention here that the first head of ISIS for Khorasan region [Afghanistan and Pakistan] was Abdur Rauf Khadim, an important Taliban commander who was killed in an American drone attack inside Afghanistan in late 2014. Now ISIS is headed by Hafiz Saeed Khan who previously was the head of TTP [Tehreek-e-Taliban Pakistan] in Orakzai Agency. Although few months back there were reports in the media that Hafiz Saeed Khan has been killed along with thirty other militants of ISIS in an American drone attack inside Afghanistan, later the news of his killing proved to be false.

At present, time ISIS militants are said to be present in Nooristan, Nangarhar, Kundoz, Helmand, Herat, Badkhshan and Ghazni provinces of Afghanistan. According to FRC reports, ISIS has now thousands of militants in its ranks inside Afghanistan. Mullah Toofan, a senior and important commander of TTP and who was once the head of TTP in Kurrum agency and was notorious for his brutality has also joined ISIS and is now based in Achin District of Nangarhar Province of Afghanistan, and is a senior commander of ISIS in Afghanistan.

It is also pertinent to mention here that the Afghan army is abstaining from taking action against the militants of ISIS present in the above-mentioned provinces of Afghanistan. ISIS’s main rival and enemy in Afghanistan are the Afghan Taliban. In early 2015, clashes took place between ISIS and Afghan Taliban militants inside the Afghan Province of Nagahar where many militants were killed from both sides. However after a couple of weeks the deadly clash between the two militant groups subsided and the fighting was over.

A commander of ISIS, Yar Muhammad Daur, who belongs to North Waziristan Agency and was previously affiliated with Gull Bahadur Group in North Waziristan said that most of the foreign militants like IMU [Islamic Movement of Uzbekistan]have also joined the ISIS and IMU militants are not allowing the militants of ETIM [East Turkestan Islamic Movement] to use Badkhshan route to enter China to carry out across border attacks inside China.

“IMU [Islamic Movement of Uzbekistan] militants have in clear terms told the militants of ETIM [East Turkistan Islamic Movement] that as long as they do not accept the Caliphate of Abu Bakar Baghdadi, IMU militants would not allow them to use Badkhshan route to carry out attacks in China”, said Yar Muhammad Daur.

According to a senior commander of ISIS, Iqbal Khan, who also belongs to North Waziristan and was affiliated with Gull Bahadur group and has shifted to Afghanistan in 2014 to avoid the consequence of military operation Zarb-e-Azab, ISIS in Afghanistan is faced with financial problems due to difficulties in transferring of funds from Iraq and Syria to Afghanistan.

“Once ISIS financials problems are solved, then ISIS would be in much better position and it would conquer more areas in Afghanistan”, said Iqbal Khan.

According to Iqbal Khan, ISIS is likely to defeat the Afghan Taliban in the fierce battle going on inside Afghanistan in less than two years.

“ISIS [Islamic State] will conquer Afghanistan from Afghan Taliban who are not true Mujahids and they are on the pay role of the Pakistani government, an ally of America and NATO, who is using Afghan Taliban for its own interest inside Afghanistan” said Iqbal Khan.

Moreover, Iqbal Khan blamed the Afghan Taliban for promoting illegal drug trade to meet the financial needs of their group in Afghanistan. On the other hand, ISIS has banned the cultivation, selling and purchasing of all kinds of drugs in areas under its control and even snuff, which is used by majority of Pashtuns dwelling in Afghanistan and Pakistan, has also been banned.

“ISIS [Islamic State]mujahids have arrested many local tribesmen involved in drug business and have also destroyed poppy field in the areas under their control”, said Iqbal Khan.

Azam Tariq, the spokesman of Khan Sayed Group, denied the news regarding the growing presence, influence and escalating operational capacity of ISIS in Afghanistan and said that every region has its own political and cultural situation; ISIS may be powerful and have the support and sympathy of people in the Arab lands but here in Pakistan and Afghanistan the political and cultural situation is totally different than that of the Middle East.

Azam Tariq said that ISIS has a very weak network in the region and the foreign media is giving undue coverage and making propaganda about the influence and power of ISIS in Pakistan and Afghanistan.