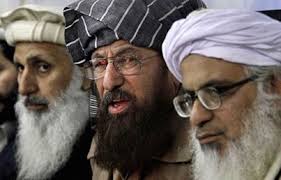 The three members group, including Maulana Yusaf Shah, Maulana Abdul Hafeez and Professor Ibrahim, were air lifted by Army Aviation Helicopters from Miranshah about 9am in the morning.

According to political administration official, requested not to be named, Taliban have set the following three conditions for talks with the government;

a)     Withdrawal of security forces from militancy affected areas in FATA

b)     Release of Taliban prisoners

The delegation had arrived Miranshah earlier on Saturday evening and was received by the political administration officials.

“Political Agent NWA warmly received the group members and briefed them about the prevailing security situation in the agency”, revealed an official of political administration, with the condition of anonymity, while talking to FRC.

“TTP members took the three-member group along with themselves to an undisclosed location to meet their high command”, added further by the official.

After spending one night and a day with Taliban, the group reached local administration office on Sunday night and after spending a night with Political Agent they left for Islamabad at morning today (Monday).

“Members of the group after their consultations with Taliban higher-ups were optimistic about a durable peaceful dialogue process”, said the official.

It merits mentioning here that it was the first face to face meeting between the Taliban nominated members and TTP Shoora members.