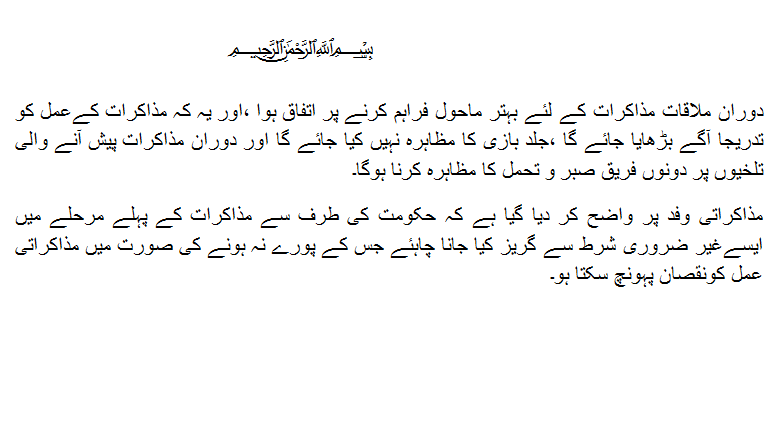 Miranshah, Feb 11: Tehreek-e-Taliban Pakistan reiterated their seriousness in the ongoing peace dialogue with the government of Pakistan and urged to avoid setting conditions which might make the peace process difficult to advance.

The banned outfit circulated the message/pamphlet electronically among the media men of North Waziristan Agency here on Monday revealing the confirmation of meetings held between TTP and peace delegation including Maulana Yusaf Shah and Professor Ibrahim.

The spokesman exposed that the peace delegation members had discussed the agenda for discussions provided by the government of Pakistan with TTP Shoora (Taliban Assembly) members and after rounds of discussions we suggested few more points to be included in the agenda.

“The members of the committee presented the demands of government in front of our shoora members and after mutual consultations we agreed upon few conditions to be presented to government of Pakistan also”, said the spokesman.

The outlawed organization spokesman, Shahid Ullah Shahid, further added that during the meetings we agreed to promote a healthy environment viable for conclusive peace talks thereby exhibiting a great show of restrain.

“We agreed that both the parties involved in the dialogue, TTP and Government of Pakistan, must avoid any show of power at any stage of talks as it might sabotage the ongoing peace process”, Shahid Ullah Shahid said.