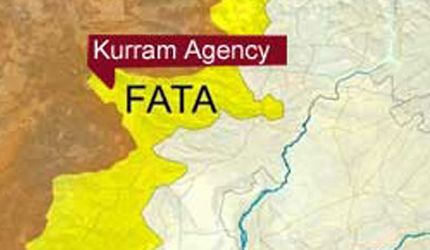 Kurram Agency: 30 Oct, 2013: One woman killed and ten tribesman were arrested in the abrupt attack of kurram Militia due to collective land ownership conflict in Balish khel, kurram Agency

As per details, residents of Khar kali and Balish Khel village want to build houses on their collective land. Kurram Militia personnel snatched guns from tribesmen and tried to stop them. A colonel of militia ordered the soldiers to open fire on locals which killed one woman.

While addressing an emergency press conference in Parachinar elders of Turi Bangash tribe Haji Hamid Hussain, Haji Abrar Hussain and other leaders said that “Tribesman of Balish Khel and Khar Kali often protested against the illegal control of other tribes on their collective land and they took that issue at Government level. But the government did not take any steps on it. Mr. Baseer Khan former Political agent order to demolish the constructed areas but it was not implemented”. Now when the tribes of Balish Khel and Khar Kali desired for settlement on their collective land then FC interrupted and targeted them, they added,

At the end, tribal elders demanded from the concerned authorities to immediately investigate this incident and appeal for the demolition of illegal constructions in the area of Balish khel according to the court’s decision