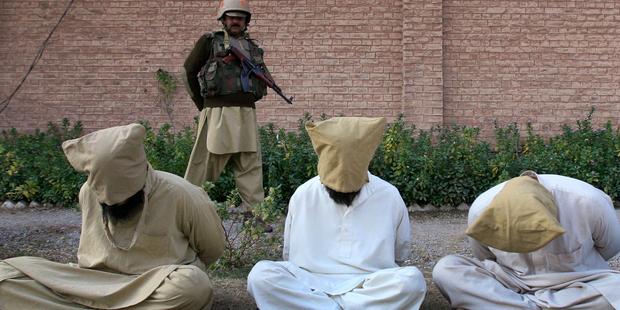 Islamabad, December 13: Millions are locked in perpetual lawlessness in Pakistan’s North-western Tribal Areas, where human rights abuses committed by the Armed Forces and the Taliban are beyond the reach of justice, Amnesty International said.

Thousands of men and boys have been detained by the Armed Forces – many have alleged torture, are held in secret places of detention and never seen again. Investigations into such cases are extremely rare and ineffective even when they do take place.

In a new report, “The Hands of Cruelty” – Abuses by Armed Forces and Taliban in Pakistan’s Tribal Areas, Amnesty International highlights how the region’s “legal wilderness” is fuelling a human rights crisis.

“After a decade of violence, strife and conflict, tribal communities are still being subjected to attack, abduction and intimidation, rather than being protected,” said Polly Truscott, Amnesty International’s Deputy Asia Pacific Director.

Human rights safeguards under Pakistan’s constitution and the courts are excluded from the Tribal Areas, where the Armed Forces are using new broad security laws and a harsh colonial-era penal system to commit violations with impunity.

“By enabling the Armed Forces to commit abuses unchecked, the Pakistani authorities have given them free rein to carry out torture and enforced disappearance” said Truscott.

The Taliban and other armed groups continue to pose a deadly threat to tribal society – thousands have been killed in indiscriminate attacks or those deliberately targeting civilians over the last decade.

“The Taliban have time and again shown complete disregard for civilian lives by these indiscriminate and deliberate attacks,” said Truscott.

The report reveals that the Taliban and other armed groups are also carrying out brutal, unlawful killings of captured Armed Forces personnel or suspected spies, sometimes following quasi-judicial proceedings that fail to meet even the most basic international fair trial standards.

“Tribal communities live in abject fear of deadly reprisals on the merest suspicion of supporting the Pakistan state, or even, like the brave young activist Malala Yousafzai, just trying to defend her right to an education,” Amnesty official added.

The report is based on interviews with scores of victims of human rights abuses, witnesses, relatives, lawyers, and representatives of the Pakistani authorities and armed groups in the region.

Although the Pakistan Armed Forces have wrested back control of most parts of the Tribal Areas from the Taliban over the past three years, they have arbitrarily detained thousands of individuals for long periods with little or no access to due process safeguards.

Amnesty International has also documented many cases of deaths in custody.

The report contains many cases of enforced disappearance where detainees were held by the Armed Forces without being brought before a court, or given access to lawyers or relatives who had no idea of their fate or whereabouts.

Fundamental human rights protections guaranteed in Pakistan’s Constitution are not enforceable in FATA, which are still governed under the draconian colonial-era Frontier Crimes Regulation (FCR).

In 2011, the Armed Forces were granted further sweeping powers of arrest and detention under the Actions (in Aid of Civil Power) Regulations (AACPR).

Limited attempts by the Pakistan government to reform the FCR have fallen far short of international human rights law and standards, and have been further undermined by the AACPR.