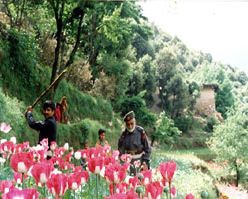 BAJAUR AGENCY, June 26: Bajaur political administration has been taking all steps in making the area free from all types of drugs while leaving no stone unturned in preventing the youth from becoming prey to the lethal drugs, FRC learnt.

This was said by Political Agent Bajaur Agency, Syed Abdul Jabar Shah, while speaking at a seminar in connection with the International Anti Drugs Day here at Khar on Wednesday that was attended by a large numbers of tribal elders, ulema, social activists, students, representatives of different Non Governmental Organizations and the officials of local administrations.

He urged the religious scholars and tribal elders besides social activists and Non-Governmental Organizations to chalk out special drug prevention awareness campaigns in the agency to prevent youth falling victims to drugs usage.

He said, “The agency has been cleared of poppy production while complete ban had been imposed over the poppy cultivation in the entire region”.

“The administration needs help of the local focal persons, including religious scholars and tribal elders, to play their role in encouraging youth to avoid drug usage”, said Mr. Shah.

He elaborated that for the last few years drug addiction had emerged as a serious threat to the young generation that has been badly affecting the youth particularly students of the region.

Mr. Shah vowed that the administrations will soon launched special awareness campaign against the drug abuse to discourage the trend of drug abuse in the agency.

“The need of the hour is to organize campaigns and educational programs on regular basis to create awareness among the children, youth, and the parents against the ills of drug usage”, he added.

Tribal elders while speaking at the occasion appreciated the efforts of the administration in making the region free from drugs and vowed to lend their support in every effort to make it a success.

“Making agency free of poppy production was a tremendous achievement by the administration because opium had always been used for drug addiction in the agency,” said an elder.

“We will assist the administration in such efforts at every stage”, added further by the elders.

The speakers emphasized the teachings of Islam adding that if we follow Islamic principles there would be no on drug addicted in the society.

On the occasion, the administrations also burnt huge quantity of seized drugs.