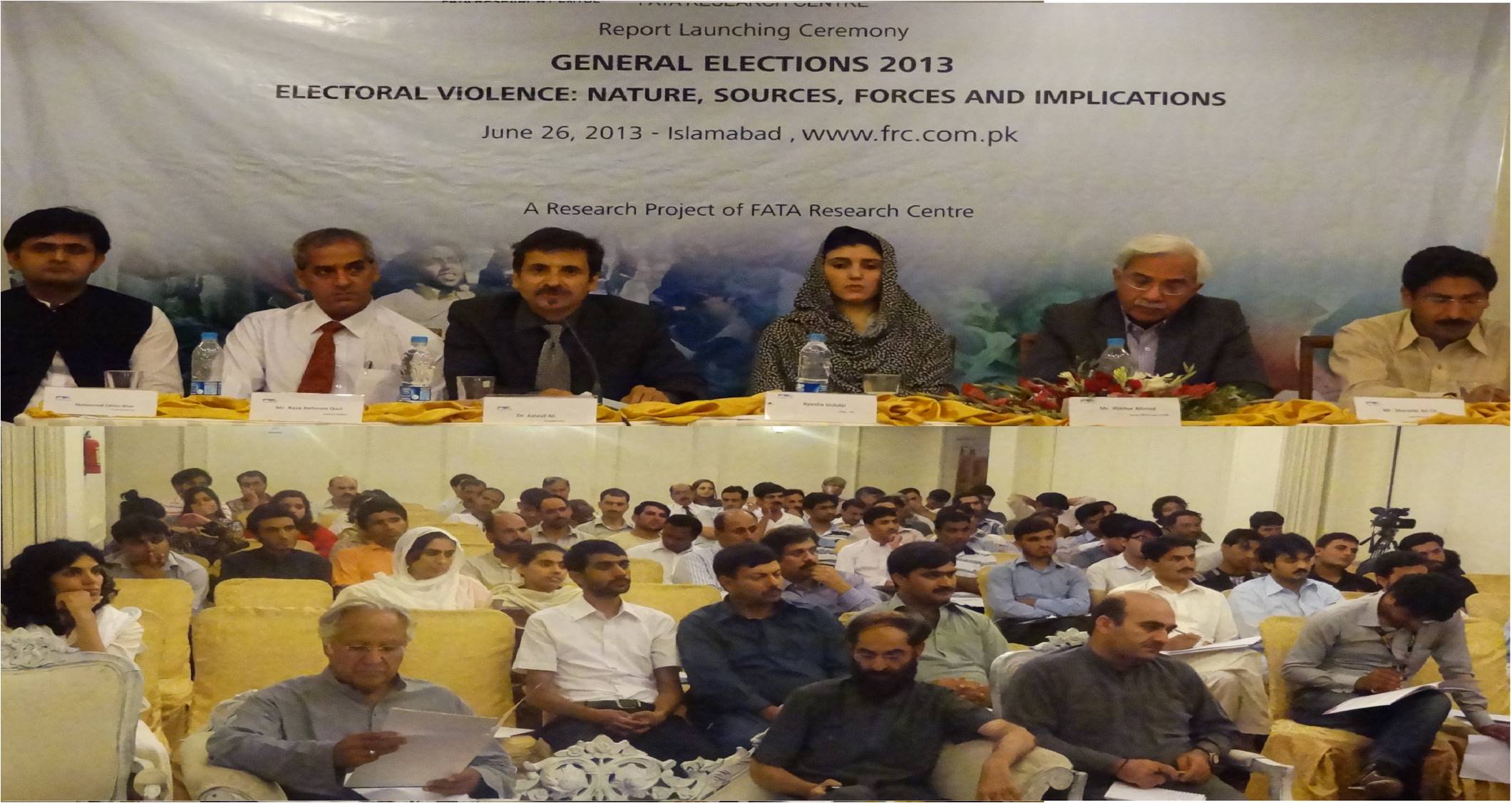 ISLAMABAD, June 27: A tribal female activist-turned-politician and a member of National Assembly on reserved seats from KPK, Ayesha Gulalai held administrative and political reforms in FATA as the preliminary steps in holding free, fair and transparent elections.

She expressed these views while speaking at the report launching ceremony “Electoral Violence in KP-FATA during Elections 2013: Nature, Sources, Forces & Implications”, organized by FATA Research Centre Islamabad here on Wednesday.

“It was the state machinery in KP and FATA that was fervently used to give triumph to few blue eyed candidates in the general election”, said Ms. Gulalai.

However she admired the vigorous participation and good turnout of tribal people on May 11, 2013, notwithstanding the deadly attacks threats given by the Taliban.

“It was not an easy task in FATA to come out to vote despite the looming death threats and all the credit goes to the brave people of FATA”, said Gulalai.

President of the FRC, Dr. Ashraf Ali, while highlighting the crux of the study told the audience that the foremost aim of the study was to gauge the scale and nature of violence during elections and its implications for the transparency, impartiality and reliability of the electoral process and political system.

Dr Ali said, “a number of existing studies have also discovered that the insurgent groups had got supporters and sympathizers in these regions due to the weak political institutions (in case of KP) and non-existent (in case of FATA). Therefore, this study also aimed at gauging the transparency and fairness of the electoral process which was the raison d’être of strong political institutions”.

Legal Expert and Director Human Rights at RAD (Research, Advocacy and Development Organization), Sharafat Ali Chaudhry, expounded the legal aspects of the electoral processes and highlighted the role of Election Commission and Election Tribunal for hearing the complaints against the violation of elections laws and rules.

“Among many positive indicators of political development, the systematic violation of election rules and code of conduct, especially debarring women to cast their vote depicts a dismal state of affairs”.

The Director added that the study would go a long way in enabling masses, policy-makers, academia and foreign stakeholders to comprehend the level of political participation and level of violence resorted to in the most important political process, the elections.

Dr. Raza Khan, and independent researcher and political analyst, who supervised the study, while throwing light on the study said that studying electoral dynamics and political violence in the KP and the FATA was extremely important because a large number of youths from the FATA and the KP had been involved in terrorism particularly unprecedented suicide attacks wave since 2007 across Pakistan.

The study found that the KP was the most severely hit province during the elections due to the Taliban attacks while against apprehensions FATA remained quite calm; the attacks and threats of attacks by the TTP also infused acute sense of insecurity among the residents of the KP and the FATA; political violence did mar the political process in the FATA and the KP but the overall scale of violence was not great; political violence was not merely limited to the TTP attacks but there were a significant number of incidents of violence in which political parties and candidates unleashed attacks on their political opponents; profound enthusiasm was observed among majority electorate in the KP and FATA especially the youths and more particularly the first-time young voters; simultaneously, deep sense of insecurity was also observed among the masses and this was the reason for relatively low voter turnout in both the regions in absolute terms as well as in relative terms in comparison to the Punjab and Sindh provinces. Nevertheless, the turnout in the KP (44 percent) and the FATA (37 percent) was relatively more than the historical patterns of turnout in these regions.