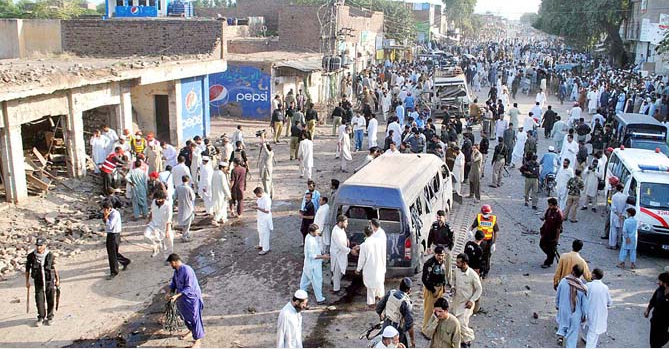 Peshawar, September 20: At least ten persons were killed including a woman and more than thirty sustained injuries in a remote control bomb blast in scheme choak targeting a vehicle of Pakistan Air Force carrying civilian employees to their homes on Kohat road on Wednesday.

Among injured three civilian employees of Pakistan Air Force were also included. According to police officials explosive of mass destruction were placed in a car standing in the scheme choak. When the PAF van passing through the area the explosive was exploded with a remote control and a heavy blast took place claiming eight innocent lives and more than thirty wounded.

The van of Pakistan Air Force and few other vehicles damaged badly. The injured were taken to Lady Reading Hospital where emergency has been imposed to treat a number of injured people who were in critical condition there.

Soon after the incident law enforcement agencies rushed to the spot while cordoning off the area and starting search operation they arrested dozens of suspects who were taken to an unidentified destination.

Up to 50 kilo gram explosive was used in the blast Bomb Disposal Unit confirmed. Talking to media reporters Inspector General BD squad Shafqat Malik said that during couple of weeks they had diffused ten bombs of heavy intensity.